By Sima KotechaNewsbeat US reporter 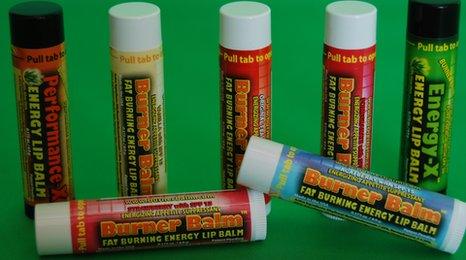 Lip balm is mostly used to heal chapped lips. But now there's a different kind on the market which claims to help you lose weight.

However, some health workers aren't impressed with it and are warning Britons against trying it.

Burner Balm hit the shops in the US six months ago and already tens of thousands of sticks have been sold there.

In the UK it can now be bought online for under £5.

The manufacturers say four key ingredients blended together make it work: Green tea (which has been linked to weight loss), caffeine (to boost energy), the mineral Chromium Picolinate - (which, it's claimed, helps the body burn fat), and the herb Hoodia (which apparently suppresses the appetite).

The Burner Balm website states the contents "have all been proven for many years to be effective as dietary supplements".

But experts have hit back, saying it's a gimmick.

You would have to put this on your lips every minute of the day to get enough to have any effect whatsoever.
Tam Fry from the National Obesity Forum

Tam Fry is from the National Obesity Forum in London. He told Newsbeat: "My main concern is young women because they're easily influenced by their peers.

"You would have to put this on your lips every minute of the day to get enough to have any effect whatsoever.

"The only answer to losing weight is eating healthily and exercise."

It's claimed the contents of the lip balm quickly dissolve through the lips and into the bloodstream so users don't even have to lick their lips for the ingredients to kick in.

Consumers are advised to apply it no more than four to six times a day.

The one side effect claimed by the lip balm's makers is insomnia due to the caffeine but they say it only happens if it's used a few hours before bedtime.

Burner Balm say they're in the process of inventing a version of the product which doesn't have caffeine to resolve this problem.

Newsbeat hit the streets of New York to find out if people thought it was a good idea.

Sure, I'd give it a chance. It sounds like an easy way to get thin
Melissa, 19, New York

Twenty-three-year-old Sam Lester is from Boston. He said: "I don't mind trying it but I don't expect it to work.

"I think it would take more than a lip balm to suppress my appetite. For some reason I just can't imagine it having a significant effect."

So far, there's no evidence that Burner Balm works but the makers say they're putting together a scientific study which proves it does.

They also claim to have hundreds of testimonials from consumers around the globe, who say they've shed weight after regularly using the product.

Matt Mills is the inventor. He said: "This is not a gimmick. It's a low cost dietary product that people want and that's being proven everyday."

Nineteen-year-old Melissa's overweight and she's willing to try Burner Balm. She said: "Sure, I'd give it a chance. It sounds like an easy way to get thin."

An "easy way to get thin" is the dream for many women and with manufacturers keen to target them but diet experts say there's really no such thing as an "easy" option.