You might know Milla Jovovich best for her part in the Resident Evil movies, but the Hollywood actress is keen to show her 'different' side. Her latest film is called A Perfect Getaway, a thriller about newlywed hikers being found dead on an island near Hawaii. She talks about the movie, what life's like after having her baby and what we can expect from the next Resident Evil. 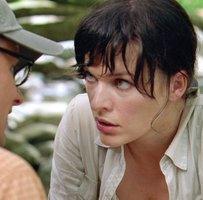 A Perfect Getaway is out in UK cinemas on 14 August