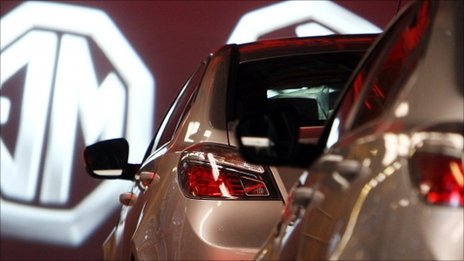 The first new MG for 16 years has rolled off the production line in Longbridge.

The MG6 is the first large-scale production at the Birmingham plant since the demise of Rover in 2005 with the loss of 6,000 jobs.

MG is owned by the Shanghai Automotive Industry Corporation, the largest carmaker in China.

It has been designed in the UK but the parts are made in China ready for assembly in Longbridge.

Guy Jones, from MG, said a total of 400 people were now working at Longbridge, in design, engineering and assembly roles.

Speaking to BBC Radio 4's Today programme, he said the response locally had been good.

"It's the start of a brand new business," he said.

"It's significant as the car drives off the production line in Longbridge.

Local MP Richard Burden said: "Today is a real milestone for Longbridge and for the automotive industry in the West Midlands.

"Longbridge has been through dark days. Nothing will bring back the days when thousands were employed on Longbridge production lines," said the Labour MP for Birmingham Northfield.

"But the greatest tribute we can pay to the heritage that made the name Longbridge synonymous with motor manufacturing throughout the 20th Century is to build a future in the 21st Century.

"Today is about that future. Longbridge is a huge site and we need to make sure that the redevelopment which is taking place beyond the MG factory itself adds real value to the potential which this area has."

One of the casualties of MG Rover's 2005 collapse was Andy Cartwright, who had worked in the paint shop for 15 years.

His house was repossessed and his wife Gemma had to support him and their four-children on her salary as a midwifery assistant at Birmingham Women's Hospital.

Mr Cartwright said: "I'm just pleased there will be mass production there again, obviously not like before.

"When I first joined there were about 16,000 people working at the plant.

"But when I see the flags flying outside, the Union Jack, the Shanghai flag and the Rover flag, I'll feel proud to know that the MG badge will always be associated with Longbridge."

MG Rover went into administration in April 2005 when 6,000 jobs were axed.

Three months later the company's assets, including the equipment at the Longbridge factory, were sold to Chinese carmaker Nanjing.

Nanjing was later incorporated into the Shanghai Automotive Industry Corporation.