'Outstanding' schools to be re-examined 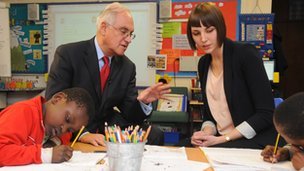 A quarter of schools rated "outstanding" are to be re-examined because their teaching did not reach the highest standard, says the new chief inspector of schools in England.

Schools will only be "outstanding" if their teaching is, Sir Michael Wilshaw confirmed.

In his first major speech he said "we have tolerated mediocrity for too long" and radical improvements were needed.

Teaching unions have accused him of "trashing the school system".

Now schools with this highest overall rating but which did not get top marks for teaching face being re-inspected.

In his speech at a school in London, in front of heads from outstanding schools, Sir Michael said: "I believe we need radical improvements to the education system in this country.

"My view is that we have tolerated mediocrity for far too long - it has settled in to the system."

Sir Michael told the BBC the new inspection framework would "focus on what really matters - the quality of teaching".

"I don't see how you achieve outstanding status unless the quality of teaching is also outstanding," he said.

The new framework slimmed down the areas on which schools are measured from 27 to four categories.

Sir Michael has formally set out other changes he plans to make by the autumn in a consultation paper published on Thursday.

A big change is a move to "no-notice" inspections.

At the moment, most schools are told a few days before an inspection when inspectors are coming in.

Critics of the system complain this notice prevents inspectors from seeing schools as they really are and some have accused schools of "bussing out" challenging pupils by sending them on day trips.

Heads said the notice gave them the chance to pull together all the data inspectors would want to see and arrange cover for staff the inspectors might want to talk to.

Another change proposed is the scrapping of the "satisfactory" label.

This would mean there would be three possible gradings - outstanding, good and "requires improvement" - instead of the current four.

"All parents want their children to go to good schools," he said.

"If a school is not good it will be placed in a category requiring improvement. If it does not improve, it will end up in special measures."

He said 6,000 schools were currently graded as "satisfactory" and too many of these were "coasting".

Sir Michael said he wanted all schools to be good schools: "This is about a step change. We want to make sure we move things further forward for this nation and that the gap between best and worst and richest and poorest closes.

"These have not closed as much as they should have."

Chris Keates, the general secretary of the NASUWT, said Sir Michael's comments called in to question "every Ofsted judgement which has ever been made on any school".

"He is trashing the school system, trashing the reputation of Ofsted and removing anything that parents can rely on by which to judge a school.

"This is puerile game-playing at expense of schools, their teachers and pupils.

"The secretary of state's strategy of letting outstanding schools automatically become academies is now in tatters."

Clare Bradford, head teacher at Henbury School, a comprehensive in Bristol, is disappointed her school was recently rated only satisfactory by Ofsted, despite dramatic improvement.

She told Today: "I completely agree with Sir Michael that every school should have aspirations to be at least good or outstanding but it's very difficult for schools, particularly in challenging circumstances".

She said her school had seen the number of children with A* to C grades rise from 13% to 46% - and it was "quite galling" to be rated only as satisfactory.

Sir Michael responded by pointing out there were currently 700 schools "in challenging circumstances" which were graded as "outstanding".

As a head teacher, he was credited with turning around struggling schools.

The head teachers' association ASCL said it welcomed the tighter focus on teaching and learning in Ofsted inspections, but said schools in challenging areas should have the same chance of a high grade as a good school in a less difficult area.

Malcolm Trobe, deputy general secretary of ASCL, said: "This is not about making excuses, it is acknowledging the challenges that schools in disadvantaged areas are dealing with, in addition to raising results".

"The message that teachers and heads will take from today's announcement is that the chief inspector sees them as part of the problem rather than the solution," he said.

"This is no way to improve our education system, nor to treat hard working professionals who are doing the best for the young people in their care."

"The government should ensure all schools, including those rated as outstanding, are inspected on a regular basis. Parents need to have confidence that a school's Ofsted rating is up to date."