The Bees Sunshine Hit Me Review

The real joy to be found in a hand-tooled album like this is imagining what its...

There are times when someone decides that an album deserves plaudits, laurel wreaths and all round backslapping because it's an auspicious debut recorded without the help of some guy with a ponytail in a big office. Well, far be it for BBCi Music to pooh-pooh such laudatory behaviour but surely history tells us that you can count your chickens far too early? Whither Roni Size these days? The real joy to be found in a hand-tooled album like this is imagining what its siblings could turn out to be like if its creators are just left to get on with it.

And what a funky little curio this album is? Blessed with a running time polite enough to not overstay its welcome, it cuts a meandering swathe through a whole plethora of styles. The overall vibe is one of laid back summer ambience sprinkled with surreal lyrics that hint at a some definite herbal assistance. Songs such as the breezy opener "Punchbag" with its swaying horns and the reggae charmer "No Trophy" both display an easy dynamic while retaining a sense of the absurd. "Angryman" is all Curtis Mayfield meets latter-day Beck and contains the central message of the album: that of tolerance and the triumph of kindness over anger. It's as if the Mexican-style masked wrestlers on the rather lovely cover are actually fighting for love's redemption.

The Central American theme hits a somewhat sticky path with their cover of Os Mutantes' "A Minha Menina". Used extensively as the wonky good-time background music to a thousand TV clips this summer it's undoubtedly effective and known to millions, but adds absolutely nothing to the sacrosanct original. By the close, however, Bees have regained any lost ground by allowing us to share in the blissed-out piano stumble of "Zia" - one of those tracks so deceptively simple as to make you wonder why you didn't think of it first. Its only drawback is that it's so good that it will endlessly crop up on innumerable The Best Chilled Out Jazz Bliss Ambient Album Of All Time-type compilations.

The loving message of the closing track "Sky Holds The Sun" acts as some kind of mantra/epilogue with the couplet about wanting to hold the one you love like? well, the sky holds the sun, leaving one with a sense that everything will be alright. At this stage the rather obvious debt to Beck and, especially, the Beta Band is a little too obvious, and the stylistic mixture still hints at a lack of purpose. But the fact remains that this IS an exemplary album, recorded by two blokes in a shed in the Isle of Wight that, at times, has the power to become sublime.

To kill the goose who lays the golden eggs with hyperbole would be a crying shame. We need as many off-the-wall homegrown efforts as we can get these days and it's certainly more interesting than watching another bunch of testosterone-fuelled heroes attempting to breath life into rock's bloated corpse. Forget the Hives - concentrate on the Bees instead. 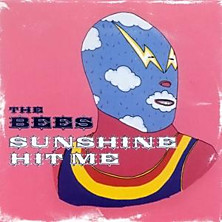