New retrospective from the best British pop duo of all time.

Well, of course an outfit that have been in the process of releasing worldwide chart-topping amazement for a quarter of a century have released a Best Of before (Discography in 1991, and there was the PopArt double disc delight in 2003), but there are numerous reasons to justify the existence of Ultimate.

Firstly, it is 25 years since West End Girls topped the chart. Secondly, Discography is very wonderful, but there’s been 20 years since that landmark. And thirdly, the addition of a (not in the slightest bit terrible) DVD which features highlights from their Top of the Pops, Wogan and Old Grey Whistle Test performances, and their star turn at Glastonbury this year, is reason enough to own these tunes again.

With 18 hits literally spanning their career, and a brand new one – the rather marvellous rave o’clock synths of Together – there have no doubt been online unrest and actual riots at the tunes missed out from their 40-plus array of singles. Questions have been raised over the omissions of Opportunities and Rent for starters, but there have to be casualties in situations like these. There’s no messing with the quality of tunes such as It’s a Sin, Being Boring and Left To My Own Devices from the group’s imperial phase in the late 1980s, and only an idiot would dispute that What Have I Done To Deserve This? isn’t anything but a proper modern classic.

What Ultimate offers is highlights from every album in a pleasingly ordered tracklisting ensuring that anyone who may’ve switched off around the mid-90s gets a taster of later treats such as New York City Boy, Home And Dry and last year’s sublime Love etc. As for the DVD, it’s the audio/visual document you’d hand over to alien invaders as evidence of true genius, in an attempt to have them spare our planet. It’s a more than worthy celebration, and justification that Neil Tennant and Chris Lowe are the best British pop duo of all time. Long may they reign. 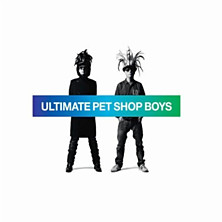