Since the release of Wolves of Miami/Muscle Cars last year we have been itching to get...

We have our first contender for album of 2004

This refreshing and at times startling debut originates, from of all of places, Scotland's far-flung Isle of Skye and the studio of 24-year-old Myles MacInnes. "I'm just having fun," he refreshingly declares, "It's got to have impact, otherwise I just don't see the point". Impact is right!

With a sound characterised by sophisticated electro stabs, classy breaks and fat-bottomed bass lines it is remarkable to learn that most of Mylo's production tools are computer internal. His music is rich, varied and well balanced and sounds as if it has had an army of engineers assisting him. Like AdamF who set out to make his seminal Colours album on a limited equipment, Mylo's genius is evident in his one-ness with his G4.

Opening with a trio of downbeat electronica cuts - "Valley Of The Dolls", "Sunworshipper" and "Muscle Cars" - it's clear that his time spent in the San Francisco's Bay Area has rubbed off with the beats oozing of the distinctly rich surroundings West Coast vibe.

Mylo first appeared on the scene only twelve months ago with his debut single, "Destroy Rock & Roll" - a high-octane guitar workout bending chunky beats with a raucous vocal sample. Despite label interest, with the backing of a couple of friends, he decided to go it alone and created Breastfed.

A wise move that has since seen his label tipped as one to watch in 2004; stable-mates Linus Loves just one of a handful of acts tipped to make more than just ripples. And as with LL's "The Terrace" that takes its cue from Stevie Nicks', "In My Arms" similar weaves a hypnotic disco spell chopping up a riff from Kim Carne's "Bette Davis Eyes" from the same era.

With influences ranging from Prince ("Guilty Of Love") through to Daft Punk ("Ottos Journey") and even Scissor Sisters ("Musclecar Reform Reprise"), it's little wonder that The Face described him as "Scotland's answer to Royksopp". By refusing to adhere to any one musical style, Mylo may well become one of the most misunderstood artists of his generation, yet despite this, expect this totally absorbing debut to make its mark on the end of year 'best of' listings. 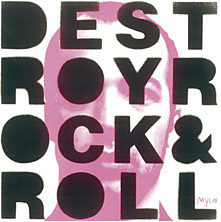