Some sort of national treasurehood awaits.

It's a very British thing, the Saint Etienne experience. Their key genius lay in their ability to take the mundanity of a very English way of life and reimagine it into exotic nuggets of pop magic. Cafes, tube stations and motorways. Bus stops, The KLF and the Generation Game. Perhaps if they'd got their wish of having a tiger onstage with them back when they debuted on Top Of The Pops, things could've been so different.

This collection may not be the first Etienne compilation, but with 35 tracks from their 18 years of existence, it pulls together all the singles along with choice EP and album tracks. It's a wonderful distillation of a career brimming with fantastic moments. With disc one telling the chart action end of their story – all the hits, with a pair of new tracks attached, such as the bracing Xenomania team-up of Burnt Out Car and This Is Tomorrow, in which they could be saying cheerio to us for good – disc two adds further less-chart-bothering singles and cast adrift at the end is their sublime festive favourite, I Was Born On Christmas Day.
Of course, fans may quibble at some ommissions, but seeing as Bob Stanley and Pete Wiggs know their way around a retrospective – they compiled the immensely marvellous Glen Campbell Capitol Years set, as well as reactivating lost classics such as The Peddlers – we should just leave it to them.

The debut single was a very of-its-time-version of Neil Young's Only Love Can Break Your Heart, slipping in nicely with the times of loose trousers, and the full length remix is still one of Andrew Weatherall’s finest moments. From there we journey through electro folk (Like A Motorway, How We Used To Live), euro house (He’s On The Phone, Pale Movie) and chandelier symphonies (Avenue, Hobart Paving). They've turned their hand to almost anything. Sequenced as it is, London Conversations is a joyous musical adventure through the greatest place on Earth.

They may have not sold millions or filled major stadiums, they may not have hung out with Bono or had a very public crack-based meltdown, but, and probably because of all that, Saint Etienne remain very special indeed. Some sort of national treasurehood awaits. 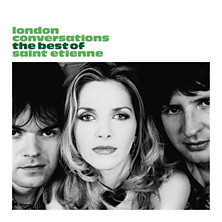