Electro trio travels further from the dancefloor, picking up new tricks as they go.

The Darkstar that we hear on News From Nowhere bears little resemblance to the production outfit that were bang on the "future garage" trend back in 2009 with their Hyperdub single, Aidy’s Girl Is a Computer.

Even then, though, there were suggestions that the group – at the time, the duo of James Young and Aiden Whalley – were looking beyond the dancefloor for their kicks. Their mutant two-step experimented with floaty electronic textures and strived for a fuzzed emotional quality some way removed from familiar raving highs.

Their debut album, 2010’s North, made this break explicit, as Young and Whalley employed a vocalist, James Buttery. They subsequently embarked on a new direction of chilly synth-pop – notable amongst these tracks was a take on The Human League’s (You Remind Me Of) Gold.

But News From Nowhere shifts the goalposts once again.

A bit like Animal Collective, in fact, who tracks like Amplified Ease or You Don’t Need a Weatherman somewhat resemble. But Darkstar’s gleaming, pristine electronics pull them some way from that particular group’s wild canter through the experimental backwoods.

Instead, songs like Young Hearts and Hold Me Down employ techniques drawn from synth-pop, folktronica and the shimmering ambience of Eno collaborator Harold Budd.

Their aim isn’t always true: Armonica ladles effects onto Buttery’s vocal to cover up the paucity of its tune. But elsewhere, things come together quite beautifully.

A Day’s Pay for a Day’s Work opens with lead-like Pyramid Song piano, and slowly opens up into a sleepy-eyed mini-symphony, like an electronica Van Dyke Parks. Later, Hold Me Down is a lush tumble of ambient repetitions that closes the disc in gorgeous fashion.

They’re further from the dancefloor than ever – but Darkstar are picking up new tricks as they go. 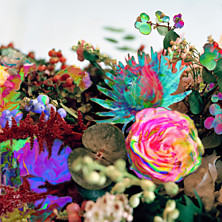