A frisky, marvellous delight from beginning to end.

It’s Christmas time. There’s usually no need to be afraid. But let’s face it, it’s never really the most inspiring period for popular music. For every gem or two wrestled from each Christmas-themed release, there’s usually a sleigh-load of rubbish to wade through. So it’s a pleasure to report that those good folks Saint Etienne have decided to up the ante with not just an amazing single, but a whole tremendous album of Christmas joy and goodness. But be quick to get it or drop heavy hints, though, as it’s a limited release and likely to get snapped up almost immediately.

Given the bitter weather, it’s nice of Sarah, Bob and Pete to provide something to keep you warm with a set that collects together previous fan club releases along with 1994’s I Was Born on Christmas Day smash, as well as recording a half-dozen new additions to complete proceedings. Alongside well-selected covers of Cliff Richard (21st Century Christmas), Chris Rea (Driving Home for Christmas), Billy Fury (My Christmas Prayer) and The Doors (Wintertime Love), there’s the tinsel techno rave-up of Gonna Have a Party, the sizzling glam of Come on Christmas, the icy OMDness of Through the Winter and the instrumental interludes of Snowbound on the South Bank and Fireside Favourite. They finish off with their version of Harry Nilsson’s Snow, from 2003’s fan club disc. There are no new takes on carols, nor any narky topical dialogues about the commercialisation of Christmas among this lot; instead, it’s a groovin’ assortment of magic and sparkle all the way.

A frisky, marvellous delight from beginning to end, A Glimpse of Stocking finds itself high and firmly in the lineage of quality festive albums, to be filed beside similarly themed releases by the Carpenters, Ella, The Beach Boys, Low and Phil Spector. It is, albeit not quite literally (nobody wants a record exploding in their hands), a cracker. 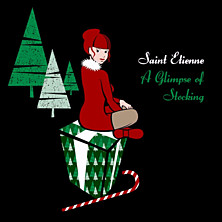