Rakim Mayers aka A$AP Rocky has been hailed as a harbinger of a new era for hip hop, an avatar for a new aesthetic. When his Live.Love.A$AP mixtape appeared in late 2011, the narcotic lushness of Michael Volpe aka Clams Casino’s production and the narcissistic posturing of Rocky did indeed seem game-changing.

Well, if Long.Live.A$AP, his long-awaited – some might say dangerously delayed – debut album proper, represents a radical break with hip hop’s past, it’s mainly in the sonics not the lyrics.

The best tracks have the blurry, codeine-stunned sound that Volpe brought to bear on that mixtape. Surprisingly perhaps, only a couple of the tracks here – LVL and Hell – are Clams affairs, although some of the other producers do replicate his trademark touches.

An album-long team-up between A$AP and Clams might have resulted in the masterpiece that Long.Live.A$AP has been touted as (albeit mainly by A$AP himself). It might also have helped to temper, or at least provide a better, prettier context for, the rapper’s more atavistic tendencies.

PMW stands for “pussy money weed”, but somehow amid the aural fog Rocky’s declaration – “it’s all a n**** need” – is almost subverted.

Away from the billowing, softening effect of Clams’ slurry sound-bed, Rocky’s bluster is just that: a bog-standard litany of braggadocious assertions and announcements of conspicuous consumption.

There is a guilty thrill to be had from F***in’ Problems and the varyingly offensive explorations of the titular dilemma (too many women, too little time, that old chestnut) by Drake, 2 Chainz and Kendrick Lamar.

But the expectation was for a different agenda from this 23-year-old New Yorker with “extraordinary swag and a mouth full of gold” (as he states on Goldie).

You don’t get a sense of Rocky revelling in his own considerable talent. Instead, you get a hipster propped up by name producers – Danger Mouse, Skrillex (A$AP's languorous menace doesn't quite work with the latter's shrill sonics on Wild for the Night) – and guest artists from across a multiplicity of genres.

Florence, Santigold and the usually brilliant Danny Brown do little more than tick boxes, and ultimately Long.Live.A$AP fails to match its hype with a coherent trend-setting statement. 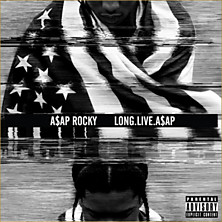