Bělohlávek and the BBC SO make a powerful case for this intense work.

Late Romantic composer Josef Suk, Antonín Dvorak’s son-in-law, wrote a substantial body of works, many of them bold and ambitious and deserving of a place in the modern repertory.

Suk has no greater champion today than his Czech compatriot, Jiří Bělohlávek. Following up his previous Chandos release coupling Suk’s Symphony No.1 with Ripening, here Bělohlávek presents two substantial symphonic poems, again with ‘his’ BBC Symphony Orchestra – the excellent studio recordings were made in January 2012, eight months before he was due to stand down as the orchestra’s Chief Conductor of six years.

Suk’s best known orchestral work, the mournful Asrael Symphony, was written in memory of Dvorak and his daughter Otilka – Suk’s wife – whose deaths within months of each other in 1904 devastated the composer. The double tragedy occurred while Suk was already planning a new piece, one which subsequently reflected his acute loss. Prague, Suk's Op. 26, was conceived as a symphonic poem dedicated to the Czech capital, incorporating elements of its rich, sometimes turbulent, history and reflecting its mystical allure. The finished 25-minute work conveys pride in his home city, but there is poignant sorrow in a love-theme originally written during his courtship to Otilka.

From the super-hushed atmospheric opening, shimmering strings representing the mist-shrouded Vltava river, through the swashbuckling Hussite horn calls and vivid battles scenes, to the triumphant conclusion with spine-tingling organ, Bělohlávek inspires a performance of total commitment. The orchestral sound may not be distinctively Czech, but the vibrant playing is full of character and brings the work alive brilliantly, compensating for a lack of musical development in its most programmatic passages.

They bring the same dedication to A Summer's Tale, an hour-long, five-movement symphonic poem from 1907, the second of a four-part reflective cycle encompassing death and the meaning of life. More positive than the bleakness of Asrael, it explores the healing powers of nature through an enthralling score that fuses epic, Mahler-ian romanticism with adventurous forays into impressionism (Debussy's La Mer had premiered in Paris two years earlier). Bělohlávek and the BBC SO make a powerful and impassioned case for this intense work, one that deserves to be much wider known. 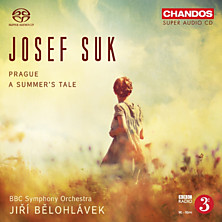