One of the most expertly compiled and emotively performed programmes around.

For many of us, a song cycle devoted to the subject of childhood death makes for a slightly uncomfortable listen, however beautiful the music itself may be. Musici Aurei's new recording of Mahler's heart-rending Kindertotenlieder is certainly both beautiful and uncomfortable. It's also absolutely riveting.

Originally scored for medium voice and orchestra, the Kindertotenlieder appear on this disc in their incarnation for chamber orchestra, a reduction penned by Rainer Riehm in 1987. The intimacy created by the pared-down ensemble, not to mention the arrangement's pellucid Schoenbergian style (at the time, Riehm had recently completed Schoenberg's unfinished reduction of Mahler's Das Lied von der Erde), ups the emotional ante as it is; but this tautly expressive interpretation pushes the sense of grief and loss to an almost palpable level. Add Sara Mingardo to the mix, and it's pretty much unimprovable. Although usually a performer of Baroque repertoire, Mingardo is a natural partner for this work with her extraordinarily rich contralto depths and interpretive capabilities. She delivers Mahler's literally breathtakingly long lines with effortlessly poised legato control. Her vocal tone is another delight, its warm bloom creating a lovely counterfoil to the viscerality of her accompaniment.

Other death- and loss-inspired works, often with links to Schoenberg, make up the rest of the disc: Schoenberg's chamber reductions of four of Mahler's Lieder eines fahrenden Gesellen (Songs of the Wayfarer), Mahler's early Quartettsatz, and Busoni's Berceuse élégiaque. Musici Aurei's interpretation of this last work, which Busoni wrote in memory of his mother, will creep under your skin just as effectively as their Kindertotenlieder does, its musicians stretching out a stomach-knotting sense of quiet, grief-stricken tension over the course of the piece's 10 minutes. In fact, as programmes go, this is one of the most expertly compiled and emotively performed you'll find around. If perhaps not the cheeriest. 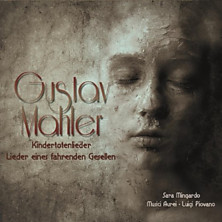