A beautiful next step in the ongoing saga of Baroness.

You’ll recognise John Baizley’s voice if you’re a Baroness fan, but there will be some immediate doubts; doubts that border on apprehension, as this is a markedly different album than its predecessors.

Yellow & Green sits apart from the stunning sludge of Red Album and Blue Record, material that made everyone from the metal press to the indie sheets sit up and take notice of the Savannah, Georgia quartet. This double album effort is a distinctly mellower affair. The abrasive vocals of yore are only hinted at, and the instrumentation has taken on more of a sprawling rock sound. But it’s brilliantly realised – the kind of album that will set Baroness apart from their peers in years to come.

Yellow & Green is so good that, despite the quite dramatic change in style, it may well become your favourite Baroness album. From the Yellow half of the album, the driving and brooding Take My Bones Away will be the first to latch onto the singing-to-yourself part of your brain. It’s followed by the rumbling melancholy of March to the Sea, the underwater echoes of Sea Lungs and the wonderfully emotive Eula.

What’s already an excellent record grows further come its Green side. More upbeat from the straightforward rock of Board Up the House onwards, this half of proceedings ebbs to an even more reflective position. Stretchmarker and Foolsong are the notable diamonds, but this is a sea of jewels.

The quality of songwriting and amount of raw passion on show throughout is striking. A shift from such a well-supported branch of heavy metal to what could be perceived as a more commercial sound is a difficult one to achieve.  But call a band led by a man as staunch in his artistic rites as Baizley sell-outs at your peril. This nearly flawless collection is simply the next step in the Baroness saga, and it’s a beautiful one. 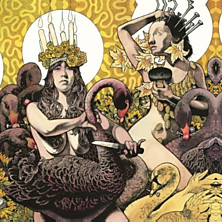