The Sleazy Listeners The Romance Is Over Review

Montreal based Squirrelgirl Records hasn't been doing too badly lately. Label owner Jen Morris's collaborations with labels like Intr_Version and RrsR/Mangenerated and her participation in last year's Mutek Festival means that she's quickly made a name for herself in the often convoluted world of North American experimental music.

Yet it's this first 'official' release from Squirrelgirl that might be the one to bring the label to the forefront of a dynamic and already eclectic scene. Rather than focus solely on local talent, she's set her sights across the Atlantic to Scandinavia, toa project that's happened almost entirely by accident.

The Sleazy Listeners features Norway's experimental music bad-boy Lasse Marhaug (Jazassin, Tore Honore Bore) and Canada's own troublemaker Zev Asher (Nimrod, Roughage) who got the band started after two years mailing recordings back and forth between Toronto and Trondheim after a chance meeting at the Tromso International Film Festival in January 2001.

"Dumping Grounds" starts things off and greets us with a strange mix of choral voices and what sounds like circus music, all flipped over backwards with Zev's half-speed crooning gently floating on top. Think V/Vm remixing a Kitty-Yo B-side.

"Foot and Mouth" simply turns the distortion pedal up a few notches and butchers the harmonics for good measure,giving us that extra special distorted pop music gone-horribly-wrong feel. "Makes Me", though flanged and phased out to the very brink of collapse, somehow reins itself back in to become something otherworldly and oddly beautiful with a string section crawling its way to the top of the mix.

Fans of the pair's previous work might just be surprised at the even more pronounced left-field direction this project brings them. It's less Merzbow-lite than a rejected alternative soundtrack to Fear and Loathing in Las Vegas.

Ultimately, this slightly disturbing journey through an avant-garde pop music wonderland becomes a perfect soundtrack for those mornings when you just don't know which side of the bed you've woken up on. It satisfies more and more with every listen. Recommended. 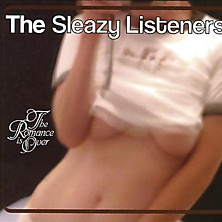