East 17 The Very Best Of Review

The album will raise a smile on the face of anyone who grew up with the sound of East...

Back in a dim and distant land known as the 1990s, a style of music existed which holds little place in today's charts...that of the boy band. Take That, Boyzone, 911, Let Loose were all groups of attractive young men who initiallybuilt up their fanbases in gay clubs before swarms of screaming teenage fans began to follow them across the land.

An infamous part of this boy band era were 4 young men who mixed rap with their pop melodies and took a more 'street' attitude to life. They were called East 17. Tony, Brian, Terry and John originated from the London postcode their name describes and were famous for not keeping the squeaky clean lifestyle their contemporaries claimed to uphold. From 1992 to 1997, they chalked up 16 Top 30 hits, including one number 1, the 1994 Xmas hit "Stay Another Day".

So, 8 years after their split, quite where the idea to release a freshly packaged Greatest Hits compilation came from is unfathomable. But that's not to say the songs on the album weren't good. They were great...in their day.

The album will raise a smile on the face of anyone who grew up with the sound of East 17 around them. While you might remember your first kiss to the romantic sounds of "Stay Another Day", or the soulful "If You Ever" (featuring Gabrielle), classics like "House Of Love" and "It's Alright" can still be found on the dance floors of alcohol-fuelled Students' Unions across the country. And without a doubt, the dirty basslines on tracks like "Steam" paved the way for late 90s boy band 5ive.

Coupled with the good comes the bad, and the Hi-NRG sounds of tracks such as "Let It Rain" do make you reach for the fast forward button on your stereo. This album isn't going to win the group any new fans, nor is it going to herald a great comeback. Instead, it's an album you will play once or twice when you want to have a good giggle at what music was like in the good old 90s. 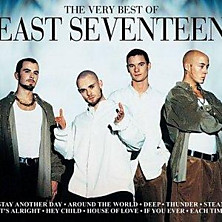