A challenging listen but with its share of stirring moments.

Cuba is best known for son, the grab bag of styles that features many of the building blocks of salsa. But it also has a large community descended from Haitian immigrants, who speak French Creole, and their traditional music is rather different. The Cuban name of this 10-piece choir is Grupo Vocal Desandann, an obvious reference to these roots. Their repertoire reflects a history of struggle against colonialism and its side effects, which has seen successive waves of refugees and migrants from Haiti pitching up in Cuba ever since the Haitian revolution kicked off in 1791.

The classical training all the members have had is evident in their sometimes slightly square tones, but this is tempered by their obvious passion, and a live-in-the-studio recording style. It’s tempting to compare them to their totally a cappella compatriots Vocal Sampling, who mimic instruments with their voices; but that group are focussed on Latin material and only sing in Spanish. The distinctive bass voices in the Creole Choir of Cuba (five men, five women) do something similar at times, but they have as much in common with a gospel choir such as Ladysmith Black Mambazo and also use some percussion. Even so, as co-producer John Simpson observes in their promotional video: "It’s all about the voices."

And what voices they are. Lead singer Fidel Miranda begins with the striking Edem Chanté, the first of several rousing freedom songs dating from the bloody years of the Duvalier regime. He also closes the album with the extraordinary Chen Nan Ren, which they performed on Later… with Jools Holland. It’s just a shame the sleeve notes don’t credit individual lead vocalists, as there’s more than one female star apart from their director, Emilia Diaz Chavez.

Most of the material is fairly upbeat, suggesting their repertoire is tailored more to live performance. Just as the stridency and driving triple-time rhythms of Tande begin to wear, they lower the tempo with the soulful Lumane Casimir. The following track Fey is a vodou folk song that seems quite different from its namesake by Haitian group Boukman Eksperyans. And Dulce Embelezo, a bolero by the great Miguel Matamoros, finds them singing in Spanish.

Tande-La has its share of stirring moments, but is also a challenging listen heard all at once, so The Creole Choir of Cuba are probably best experienced on stage first. 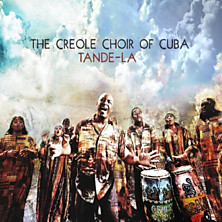