Being a product of the age it was written, Slow Club's 2009 debut, Yeah So, dealt with the all too familiar space between adolescence and the oncoming storm of adulthood. A boy-girl duo who played a flower-adorned chair live, they were the polar opposite of what was coming out of post-Arctic Monkeys Sheffield. Slow Club were fun, cute, whimsical and all manner of other words just shy of 'twee' – and they hate being called twee.

Paradise, however, is where the duo grows up. Two years on, it stumbles out of a trivial, self-indulgent teenage malaise (where sexual adventure was priority for most) and carries itself with a sense of perspective that only adulthood can give – a darker, more thoughtful view of the world. For instance, on the poignant You, Earth or Ash, a song about Rebecca Taylor's granddad, her melancholic vocals (beautiful, as always) evoke an awareness of mortality for those around her; singing "and I know, soon you'll go," her voice seemingly breaks under the weight of premature grief. Whereas even love-wise (an inspiration every band draws from) Slow Club's lyrical output is glossed with a more mature and detached sense of sauce, with Taylor crooning on Where I'm Waking: "I can see you looking at me / You got the brains I've got the body".

It's the latter, along with songs such as If We're Still Alive and The Dog, that provides Paradise’s most frantic and poppy moments, with producer Luke Smith (of the defunct Clor, and producer of Foals’ last LP) firming up the band's penchant for ramshackle drums, rattling guitars and startlingly impressive two-part harmonies; a thrown-together machine that if, not held together properly, would easily fall apart. Of course, that's not to say that, musically, this record couldn't have been made by anyone else – it's not sonically unique. Yet there's a charm here. A personality and identity that, whilst subdued compared to their live shows, bleeds through the cracks to make this album not only a snapshot of burgeoning adulthood, but also of Slow Club's singularly impressive songwriting ability. 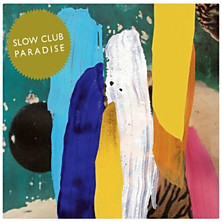