Unkind souls may consider Brendan Benson to be the Andrew Ridgeley of The Raconteurs, the quasi-supergroup he co-founded with Jack White back in 2005; but this is unfair and fairly inaccurate given that there were four of them. The old colleagues’ paths continue to converge though, as Benson’s fifth solo album emerges in the wake of White's much-trumpeted debut, albeit in a lower-key fashion. The fanfares tend to fade after your first few records, even if the quality doesn’t.

This thoroughly enjoyable release does include one surprising blast of brass, in fact, which came about after Benson bumped into a horn section at a party and decided to liven up the chorus of a lovely song called No One Else But You, which otherwise sounds like a lovelorn Gram Parsons. That's just one of numerous unforeseen shifts of tone, and there’s a carefree air throughout, the sound of a man clearly revelling in his creative autonomy.

The now Nashville-based singer-songwriter recorded What Kind of World in the warm afterglow of recent fatherhood, although the title track is an unrepresentative introduction, with its gloomy outlook and clunky lyrics. No matter, as the great rollicking howlers then begin in earnest with Bad for Me, an evocative blast of piano and power chords that really should be accompanied by a video in which Brendan is dressed as one of the girls from Heart.

The remainder barrels along with such unpretentious, anything-goes bonhomie that it could easily be another side project rather than the day job. Happy Most of the Time conjures the barroom post-pop of Squeeze, while Keep Me is a Hammond-fuelled sex-boogie. Thru the Ceiling’s moodier grunge eventually gives way to a sing-along chorus, and authentic Nashville influences rear up late on, particularly on the honky-tonk closing track, On the Fence.

"I want to get married, I wanna raise a family, and do the things that normal people do," he warbles, before the inevitable twist. "But what self respecting woman would ever have me and not stab me, when I want to have my cake and eat it too?"

Only in country and western can a casual reference to knife crime sound so jolly. 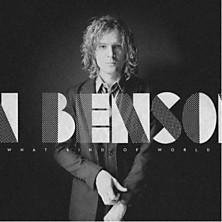