One of the hardest-rocking acts operating south of the Mason-Dixon Line.

Formed in Athens, Georgia in 1996, Drive-By Truckers have spent the last 14 years introducing the ramshackle, distorted aesthetic of 90s grunge to a vintage Southern rock template. Like a cross between Pearl Jam and Creedence, the band have consistently avoided sinking into the anonymous jam-band swamp with tight songcraft and appealingly lurid storytelling, passionately delivered by principal songwriters Patterson Hood, Shonna Tucker and Mike Cooley.

The Truckers’ main challenge has always been to avoid spreading themselves too thinly, to make a focused impact rather than diluting their prodigious talent pool with endless digression. At their finest, as they were on 2008’s Brighter Than Creation’s Dark, the band create a majestic wall of muscular riffs and emotionally direct lyricism exploring the Jekyll and Hyde duality of the Southern spirit.

The first four tracks of new album The Big To-Do are a solid continuation of the Truckers’ recent winning streak. Opener Daddy Learned to Fly kicks the album off with a thick riff and a sparkling, Springsteen-worthy chorus. Birthday Boy, an unglamorous glimpse at the daily grind of a cash-strapped exotic dancer, shows a Petty-esque flair for emotive, galloping songwriting that showcases the cinematic scope of the Drive-By Truckers when firing on all cylinders.

But just as it seems clear we’ve got another rough-edged diamond on our hands, the album begins to wander at its mid-point. The Wig He Made Her Wear sees the rest of the Truckers reduced to unassuming backing band to Cooley’s dark story of spousal abuse and murder, the noir guitar lines seeming to bear little relation to his prose-like vocals. Meanwhile, the mid-tempo plod of Santa Fe and crooner You Got Another just don’t have the nuance or mystery to hold attentions after the album’s scorching opening numbers.

Things begin to pick up with After the Scene Dies, a power-charged eulogy to the South’s dying bar music circuit, and the fragile grace of The Flying Wallendas, but The Big To-Do doesn’t maintain the expert balance that made Brighter Than Creation’s Dark such an essential release. That said, the standout tracks here are as definitive a statement of the Truckers’ virtues as you’ll find anywhere, cementing the band’s reputation as one of the hardest-rocking acts operating south of the Mason-Dixon Line. 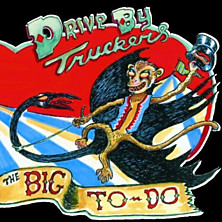