As the second of five consecutive albums which made up Stevie’s classic period, Talking Book found Wonder at the top of his game, combining tight song writing with warm electronic arrangements and effervescent vocal performances.

Released in 1972 and sandwiched between the release of Music of My Mind and Innervisions, Talking Book saw the then 22 year-old Wonder enjoying more artistic freedom from Motown, taking over the production reins and playing most of the instruments himself. As a result, the sound of the album is sharply defined by Wonder's exquisite keyboard work, and his use of the Hohner clavinet model C on Superstition became widely regarded as one of the definitive tracks featuring the instrument.

Despite making the majority of Talking Book himself, the album also benefits from the talents of guest guitarists Jeff Beck, Buzzy Feton and Ray Parker, Jr who featured on Maybe Your Baby and Lookin' For Another Pure Love. 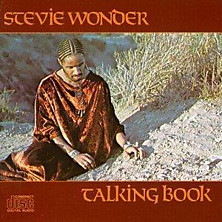