They remain among the UK’s most cherished songwriters and performers.

Anyone who caught the Pet Shop Boys touring their superb Yes album – BBC Music’s number one Pop & Chart album of 2009 – last year will know what’s coming on the latest live set from the synth-pop duo: superb choreography, dancers with multi-coloured cubes for heads, prop manipulation to give all but the strongest stage manager nightmares, and – most importantly – Neil Tennant and Chris Lowe on imperial form.

Recorded in front of a full house at London’s O2 – the duo’s hometown show on a jaunt that took them all over the world (no pun intended) – Pandemonium opens with a sequence of tracks from the band’s latest long-player, with elements of chart hits Heart (1988) and Can You Forgive Her? (1993) interspersed to keep a hold on the attentions of fair-weather followers. It’s audacious stuff, the theatricality of the accomplishment far beyond that witnessed at most arena gigs, and as the set edges towards its middle the biggest hits are conspicuous by their relative absence: a box-ticking but no-less triumphant Always On My Mind aside, we’re treated to a series of more-recent compositions, including Nightlife’s New York City Boy and Closer to Heaven, the latter also the title of 2001's PSB-penned musical.

That these comparably lesser-known efforts fit so seamlessly into proceedings, though, is wonderful testament to the evergreen consistency of the Pet Shop Boys’ output – though snippets of bona-fide career benchmarks continue to appear within the framework of other songs, Left to My Own Devices (1988) creeping in during Closer to Heaven, they exude confidence enough to carry these in-the-margins moments as easily as It’s a Sin, or West End Girls.

Which, when they come, are (expectedly) magnificently received: West End Girls closes both CD and DVD – there are more tracks on the DVD, mind – and the almighty roar at its climax is a spine-tingling affirmation of the group’s amazing longevity. They might not be the number-one artists of yesteryear – pop’s nature is to change, and they’ve adapted as best they can; wrinkles, though, tend to play against one’s a-list viability – but Tennant and Lowe remain among the UK’s most cherished songwriters and performers. Should they continue to deliver the goods in this sort of spectacular style, expect the nation’s largest venues to ring out with their work for many years to come. 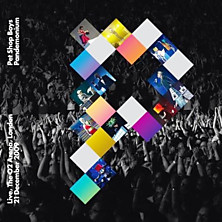