With most of these recordings already available on the 2000 box set, Maybe It's Right To be Nervous Now, it's probable that most hardcore Mags nuts will have these oft-bootlegged gems. Yet for anyone who wants a good primer as to the rawer side of new wave's more cerebral axis, this is a great place to start.

Howard Devoto had been with the Buzzcocks only long enough to record the seminal Spiral Scratch EP (as well as an album full of co-written demos that would bear fruit for both Devoto's and Pete Shelley's respective projects). He then rejected the three-chord purity and teutonic minimalism of the Buzzcocks and set forth with keyboardist Dave Formula to plough a much more intriguing furrow, happy to acknowledge the influence of David Bowie's Low and even (whisper it) a little prog. Joined by ace guitarist John Mcgeoch and future Bad Seed Barry Adamson on bass they hit the ground running with the single Shot By Both Sides.

The period of these sessions for John peel (1978-1980) covers their first three albums. Like many acts of the day the band used the BBC's studios as a fine way to hone work in progress or air lesser known experimental b-sides (TV baby, My Mind Ain't So Open, Twenty Years Ago).

From the period contemporaneous with the debut album, Real Life, we get the live incarnation of Definitive Gaze (here titled Real Life) as well as their first stompingly grandiose statement, The Light Pours Out Of Me. Devoto's lyrics are sinuous and wonderfully sneering ("Time flies, time crawls, like an insect, up and down the walls"). From here the band flex and twist like an emerging pupa, bursting into their full glory with fierce funk ( Give Me Everything and Sly's Thank You For Letting Me Be Myself Again), more icy grandiosity (Permafrost) and, finally, their artistic apotheosis with material from the Correct Use Of Soap album: A Song From Under The Floorboards; Model Worker and Look What Fear's Done To My Body (re-named on the album as Because You're Frightened), The first of these numbers reiterates Devoto's rather Kafkaesque entymological manifesto (''I am an insect/ I have to confess I'm proud as hell of that fact'').

Mcgeoch's departure signalled the beginning of the end and his demise means their reunion will inevitably fall short of collective expectation, yet this album arrives in time to remind us how brave, innovative and forward thinking they were to be proven. 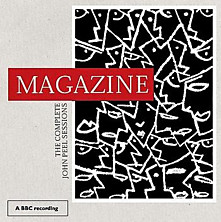