Monolithic particle generators emit insect chat to the skies, while adjacent cloud territories lie pregnant with oscillating womb throb. Welcome to the sound of Berlin 1971: transcendental proto-techno conjured by Dieter Moebius, Hans-Joachim Roedelius and Conny Plank (who’d only be on board for this album). Moebius and Roedelius had previously fussed up a discordant industrial clatter with Conrad Schnitzler in Kluster, but now they were seeking softer cosmic atmospheres, though clearly not at the expense of their indefatigable sense of the surreal. Indeed, several times during these three expansive electronic sprawls it’s as if the Mahars – a race of over-sized flying lizard telepaths from 1976 sci-fi film At the Earth’s Core – were encouraged to conduct their conversations at the heart of the swirling synthetic nimbus, employing a disconcerting range of high-pitched wails and yodelled yelp. But amid the madness were sown seeds of future creation.

At one stage towards the end of the second track (all are untitled) Wolfgang Voigt appears to have stumbled into the studio, underpinning the throng of pitch-shifted sine waves and attendant engine roar with an amplified and propulsive heart pulse. Only this beat was struck a quarter of a century before the first Gas long-player was released.

Of course, this stuff has also blown the minds of Brian Eno, John Foxx and members of Coil. But now a new global network of synth-powered cosmonauts has risen to prominence. From Emeralds and Oneohtrix Point Never to Mountains, Astral Social Club and the Ghost Box imprint, each owes a colossal debt to Cluster and this album in particular. Far from providing mere background ambience, Cluster 71’s (the original release dispensed with the numerals) rolling waves of hypnosis are continually exposed to perforation by disorienting surges of energy, imparting wake-up calls to comfort. 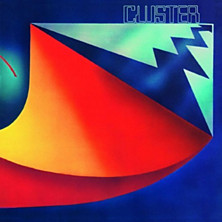