The country legend’s final album, and a fine way to bow out of the business.

Rehabilitating the sound and vision that created a musical legend – let’s call it the Johnny Cash American Recordings model – is now standard practice for artists in their advanced years. The latest recipient is Glen Campbell, whose first ‘renaissance’, 2008 covers album Meet Glen Campbell, was intermittently great, and strangely disconnected (knowing committed Christian Glen was singing The Velvet Underground’s Jesus straight was an especially weird, if compelling, sensation). But guided again by producer Julian Raymond, former vice president of Capitol Records, home of Campbell’s finest recordings in the late 60s, Ghost on the Canvas is the real deal, musical and emotionally true and sometimes devastating, on a par with Cash’s performance on Hurt. It turns out Campbell has early stages Alzheimer’s, and Raymond’s lyrics for the album’s five co-composed songs were based on comments the singer made while recording the previous album. In other words, we finally get to meet Glen Campbell.

He may be 75 and a frail ghost of his former hell-raising self, but vocally Campbell still sounds surefooted, hitting wistful, golden notes. The contributing cast of ‘stars’ supply unerring melody and no small amount of emotional triggers. Take the title-track, written by Paul Westerberg (The Replacements), full of the same aching longing that distinguished Campbell’s impeachable Wichita Lineman. Westerberg’s other offering, Any Trouble, appears to have Gentle On My Mind on its mind. Raymond/Campbell’s A Thousand Lifetimes also appears to tap Wichita Lineman without feeling manipulative. The DNA of The Rest Is Silence, one of six instrumental interludes, is pure Beach Boys, recalling the time guitar-for-hire Campbell worked on Pet Sounds and was Brian Wilson’s stage stand-in during the same era. This is history in the re-making.

But Ghost on the Canvas isn’t simply nostalgic. There’s No Me… Without You, Strong and Teddy Thompson’s In My Arms (surely the gutsiest track Campbell has ever cut) are aimed at Campbell’s wife Kim, who saw him through his alcohol and cocaine addictions that blighted his 70s. There’s No Me... which closes the album, has its own coda of elegant, elegiac guitar solos from Billy Corgan (The Smashing Pumpkins), Brian Seltzer (Stray Cats) and Rick Nielsen (Cheap Trick), which says more about Raymond’s little black book than Campbell, but collectively they hit the mark.

In the title-track, he sings "People don’t know when they’re looking at soul." You wouldn’t expect soul from a Glen Campbell record, but it takes many forms. A veteran who needs help to express his memories of a life less ordinary, but ironically sounds on the top of his game, is clearly one of them. 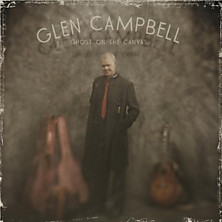