For some time now, O'Leary has seemed likely to deliver a great album; here it is.

Although recorded in 2004, this album celebrates the centenary of the birth of Samuel Beckett in 1906. All of its tracks bear titles derived from Beckett works or characters (''Endgame'', ''Lucky'') as, of course, does the album itself. Despite the titles and the photographs of Beckett that adorn the sleeve, the music does not attempt to convey the sense of his works. You need no prior knowledge of Beckett to fully appreciate this music.

Guitarist, Mark O'Leary has now released six albums in the past two years, all trios, and no two featuring the same line up. Here, he is joined in an improvising trio by two NYC-based players, trumpeter Cuong Vu (maybe best known as a member of the Pat Metheny group) and Tom Rainey (drummer with Tim Berne). The combination of instruments blends well. With Rainey adding rhythmic drive or subtle percussion washes when appropriate, but never intruding unnecessarily, the guitar and trumpet are allowed great freedom, individually or together. Vu's playing is economic, full of pregnant pauses and atmospheric silences - a Miles-ish trait that he often combines with a Miles-ish tone. And his style sets the tone for the album.

In the past, O'Leary has had a tendency to overplay, filling every available second with notes, a tendency that can make for wearying listening. Here, that is occasionally in evidence, notably on ''Mr Krapp's Neurosis'' and at the start of ''Estragon'', but elsewhere O'Leary demonstrates admirable restraint, allowing the music space to breathe. On the opener, the title track, his acoustic guitar playing is a model of taste and thrift; there is not one superfluous note, and the ringing guitar tone - captured in exquisite detail - is beguiling.

The standout track, amid several strong contenders, is ''Godot''. Opening with an eerie soundscape of sustained electric guitar tones and abstract trumpet interjections backed by a suggestion of percussion, the piece builds momentum imperceptibly over its eight minutes, driven onwards by Rainey, eventually coming to a barnstorming climax with all three players in full flow.

For some time now, O'Leary has seemed likely to deliver a great album; here it is. 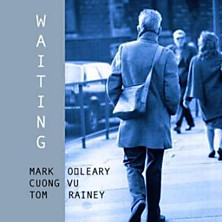