Now, it seems, her time has finally come.

At last, a glamorous Geordie showbiz lass that LA can understand. Twenty-two-year-old Beth Jeans Houghton grew up absorbing albums by Joni Mitchell and the ladies of the canyon and dreamed of decamping to the City of Angels. Quitting school early to fulfil her musical ambitions, by the close of her teens the statuesque blonde with a sophisticated set of pipes – equal parts Imogen Heap, My Brightest Diamond’s Shara Worden and those aforementioned distaff canyon troubadours – was an industry tip for the top with Next Big Thing practically tattooed on her forehand. In fact, Houghton’s hooves of destiny would be slowed to a canter and the shoo-in to stardom failed to materialise, mainly thanks to the protracted recording of this curiously named debut. Now, it seems, her time has finally come.

Even when the torrential, kitchen-sink attack abates, as on the delicate, ukulele-strumming intro to Lilliput, the hurtling drums and gilded string phalanxes are soon pouring over the folky barricades, Houghton surfing the music in a delicious formation of immense overdubbed contralto harmonies.

The tag ‘psychedelic’, which is routinely appended to descriptions of BJH’s music, seems somewhat misplaced. Sure, corrida trumpets straight out of Love’s Forever Changes, and vivid, altered state lyrics about ‘boys with eyes of mercury’ abound, but this is music which evinces at least a passing acquaintance with Tin Pan Alley principles, and, for all its art-folk inspirations, it might have been tailored for a contemporary mainstream audience who like their mellifluous pop cut with a dash of vaulting kookiness. 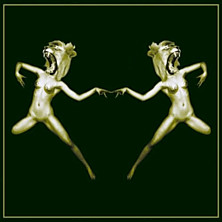