An arresting fifth collection featuring turns from Eminem and Drake.

Rihanna’s fifth album in as many years has been described by the singer as "sassy, fun, flirty, energetic" – a return to the slick pop with which she made her name following last year’s darker Rated R. But it’s not quite that simple; after all, that album delivered the dancehall smash Rude Boy while this record closes with Love the Way You Lie (Part II), an affecting sequel to her Eminem collaboration that takes on added relevance given the domestic abuse she suffered at the hands of ex-boyfriend Chris Brown.

Loud certainly (if intermittently) lives up to the singer’s promise. It is brilliantly sassy and exuberant at times – the enormous synth and shout-along chorus of Only Girl (In the World) is about the measure of it, while Nicki Minaj makes for a superb partner in crime on Raining Men, her wild, kinetic flow complementing Rihanna’s steely delivery to wicked effect.

Disappointingly though, the knowing strangeness that coloured even Rated R’s most chart-friendly moments has been toned down in favour of a brazen sexuality that sits at odds with what Rihanna is trying to accomplish here. Since when was ‘flirtatious’ synonymous with ‘sadomasochistic’? As bracingly huge and catchy as it is, S&M doesn’t deviate much from its blunt title: lyrics like "Sticks and stones may break my bones / But chains and whips excite me" feel forced, not daring. Similarly, her insistence that "I like it rough" on the comparatively restrained Skin can’t help but come across a little uncomfortable in the light of her personal history.

But the argument over whether songs like this subjugate or empower their female performers is one for another time, or maybe one not worth having at all – not when the songs are this good, the singer’s voice this powerful. What’s My Name? features the similarly young and talented Drake mulling the "square route of 69" over choppy Caribbean rhythms that reappear on Man Down, where Rihanna relays a break-up as murder metaphor in thick Barbadian patois. Love the Way You Lie (Part II) even bests the original, Eminem’s verse exuding the kind of volatile, simmering menace that got everyone so excited about him in the first place. But it is Rihanna’s vocal – at once commanding, soulful and vulnerable – that anchors the song, and Loud itself, elevating it from a hit-and-miss collection into something oddly arresting. 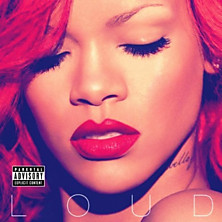