A sad and sweet collaboration, arranged with tender loving care.

A pairing of leftfield darlings, this debut collaborative album by New York’s Adam Green and LA’s Binki Shapiro sounds like a twinning of kindred wandering spirits.

Shapiro is best known for her work with Beck and Latin-tinged trio Little Joy. Green, meanwhile, has made one of the most agreeably unpredictable creative volte-faces of recent times.

He’s travelled in five prolific years from the twee deluxe of The Moldy Peaches, the anti-folk duo whose winsome naiveté dominated the best-selling soundtrack of Juno, to superb 2006 solo album Jacket Full of Danger, where he reinvented himself as baritone crooner and sounded like Glen Campbell and Jimmy Webb rearranging the words from old riot grrl songs.

So it’s no surprise that this is a wonderful record, although one suspects that the success of 60s soft-pop revival act She & Him might well have been an inspiration. If you didn’t know better, you might think that these melancholy chamber-pop love duets were long-lost Lee Hazlewood and Nancy Sinatra sessions. Or, at least, you might if Green sang a little deeper and Shapiro sang a little flatter.

As it is, this 10-track ode to the joys of a sad, sweet, mellow but occasionally dark and atmospheric love song is arranged with tender loving care and produced with just enough reverb to remind you of girl-group classics. Those, and the kind of folk and country that occasionally crept into the charts at the end of the 1960s.

The pair apparently took inspiration for this broken-hearted mood from their own separate dysfunctional love lives. Whether the beautiful friendship they’ve launched on this record has anything to do with their shattered romances, we do not yet know.

It does, though, spark the thought that this album sounds exactly like what you might get if the similarly heartbroken The xx formed a cross-generational supergroup with Sonny and Cher. They got tunes, babe. 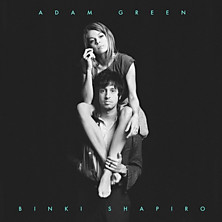