Washed Out Within and Without Review

The very name that Ernest Greene chose as his recording and performance alias – Washed Out – came to define the aching, sun-bleached, hazy aesthetic of the style of music variously known as chillwave, glo-fi and hypnagogic pop. He emerged in 2009, roughly coinciding with Memory Tapes, Neon Indian, Toro Y Moi and all the other purveyors of this distinctive keyboard-based sound, and already by 2010 their music was being dismissed in some quarters as a passing fad, a sepia snapshot of a musical era that was itself about capturing fading memories. For others, though, it remains one of the great pop genres of recent times, and never mind the jibes that it's mere muzak for hipsters.

The question advanced by their first releases, however, was whether these mainly solo American laptop boys could improve on their unimpeachable debuts. Whatever you thought of their work, they pretty much did it to perfection. And so this year has seen a spate of follow-ups evincing shifts of emphasis: on Underneath the Pine, for example, Toro Y Moi pursued a more performance-led direction.

And what of Greene? Did he peak with Belong, those two minutes and 55 seconds of languid bliss from his 2009 High Times EP? Reading between the lines of the pre-release blather, the suggestion was that Within and Without, mixed by Ben Allen – who co-produced Animal Collective’s Merriweather Post Pavillion – would be less sample- and loop-based, featuring more developed songwriting and a fuller, almost orchestral pop sound. Ironically, if anything, the nine tracks here are even less ‘song-like’ than the already gorgeous-yet-slight constructions of 2009’s Life of Leisure EP.

The muffled vocals are still present and correct; as is, via the titles (Amor Fati, Far Away), the lexicon of longing. The tenor is one of budget luxuriance, the atmosphere one of sadness that life can’t always be summerdazeforever. Opener Eyes Be Closed features the usual soft, sibilant, susurrating synths and an almost reggae-ish lilt, only smothered in a blanket of warm electronica. It feels a bit rote, as does Echoes, Greene’s voice, as ever, just another part of the blend, the lyrics hard to discern amid the amniotic synths and bubbling beats. Amor Fati has the downcast air of a Duran Duran ballad and as such hardly represents an advance. Soft is probably the highlight, but not for any dramatic reasons: simply, the chord changes are most affecting on this one. The rhythm is repetitive but sounds played rather than sequenced, offering the idea that Within and Without is less synthetic, more ‘real’, an unnecessary development considering how moving those early Washed Out tunes were, while production-wise the new material is actually a less punchy version of Greene’s pristine melancholia, more waffly and wan.

With the same torpid tempo throughout, Within and Without is an invitation to soporific surrender, and strikes a sombre, samey mood when Belong was quite strikingly seductive, a new form of synthed-up dream-pop. Etiolation and enervation were always key to chillwave/glo-fi's appeal, but this is just too pallid, too washed-out. 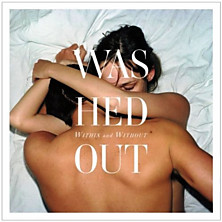