Leave your 60s-based prejudices at the door and get a dose of musical free thinking!

Brian Auger inhabits a unique position within British music. Essentially a highly regarded and talented modern jazz musician, he paid the critical price for crossing over into the pop charts, and eventually migrated to America where he felt his wide-ranging approach would be better understood and appreciated.

These three re-issued albums illustrate this point perfectly. Brian's group, The Trinity, encapsulated that odd period of time in the late 60s when mod was getting a little flowery and jazz, blues and rock musicians found a common ground in the happening London scene at subterranean clubs like The Cromwellian where mop tops and jazzers alike mingled in fab and groovy Lord Byron shirts.

Straddling jazz, rhythm & blues, folk, gospel and pop with great aplomb, it may have confused the less open-minded of the time, and may still be causing some confusion all these years later. Brian's stated intention had always been to overlay souland funk rhythms with jazz harmonies and solos and all three of these recording are packed with this very individual approach.

Open (1967) contains a slightly odd mixture of Mod R&B, folk and pop cover versions. Donovan's ''Season Of The Witch'' gets Auger's bluesy Hammond organ licks all over it whilst Julie Driscoll, the seminal 60s hippy chick, sings with a stoned, disjointed charm to great effect.

Driscoll (a fellow refugee from Auger's previous 60s supergroup The Steampacket) carved out a highly individual style, proving that she was undoubtedly the only British, white singer who had the skill and ability to bring the necessary gravitas to covers of US soul, like Aretha's ''Save Me''.

Definitely What! (1968) was Auger's first solo recording and his unique keyboard skills and offbeat humour are apparent throughout. ''George Bruno Money'' illustrates this brilliantly. Brian's Jimmy Smith jazz approach sits alongside that mildly camp Goons-like humour so in vogue at the time. This is the broad-minded musical attitude that really led to fusion or jazz-rock.

The approach developed in Open and Definitely What come to fruition in the release of Streetnoise (1969) oft cited as the first fusion recording. An impressive range of diverse influences results in the musical soundscape varying from some very funky organ freak outs, a hip cover of ''Flesh Failures'' (from the musical Hair) through to the mind blowing progressive jazz/rock of ''Ellis Island'' - and culminating in the haunting high point Driscoll's vocal version of Miles Davis' ''All Blues'' a strange and haunting rendition that will undoubtedly open up ears all over again when heard for the first time.

In the UK Auger's reputation frustratingly got stuck in the novelty jazz/pop genre due to the hit known as ''Wheels On Fire'' (the theme tune to Absolutely Fabulous) Auger quickly moved on formulating his next experiment in the magnificent, genre-defying group Oblivion Express the group that would go onto major success in 1970s America entering the jazz, pop and R & B charts simultaneously somewhat reinforcing the point of Auger's original musical concept.

This collection of recordings put the spotlight on a unique time and a unique British talent. Leave your 60s-based prejudices at the door and get a dose of musical free thinking! 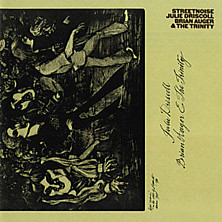