Sixth album of slow jams from US RnB star.

He never made that much of an impact in the UK, but over in the States Elgin Baylor Lumpkin, aka Ginuwine, has, for the last decade and a half, been a superstar of hip hop soul. More than that, he’s had a reputation for being a prime mover in hi-tech RnB circles, mainly because on his first two albums – 1996’s Ginuwine... The Bachelor and 1999’s 100% Ginuwine – producer Tim ‘Timbaland’ Mosley used him to road test many of his most advanced new beats, in much the same way that he did with Aaliyah.

Aaliyah, who died in 2001, gets a name-check on the sleeve of this, Ginuwine’s first album proper since 2005’s Back II Da Basics, but A Man’s Thoughts is quite a different proposition to his earlier work. It’s the same milieu – slick, glossy soul – but here the stark atmospheres and electro edge that once undercut his songs about sex and sensuality are replaced by a varnished efficiency that makes most of these 15 slow jams sound the same.

Apparently, Ginuwine and Timbaland grew apart sometime earlier this decade, and for a while now he has been searching for an effective replacement. And so on A Man’s Thoughts a variety of producers are roped in, including Bryan-Michael Cox (Usher, Mariah, Mary J Blige), and all credit to them for creating a seamless flow, Ginuwine’s Auto-Tuned melismas heightening the impression of airbrushed passion. Actually, Timbaland does make a cameo appearance on one track, Get Involved, alongside Missy Elliott, and it’s almost like a stray blast of future-funk from a completely different album mistakenly got included.

Elsewhere it’s mostly phoned-in loverman clichés and generic breathy boudoir balladry. When, on Touch Me, Ginuwine gasps, “I lose my mind every time you touch me”, you can’t help feeling he should get out more. Then again, it’s worth remembering that this is a man who lost both his parents in 2000 – his father shot himself and his mother died of cancer – and who spent many years addicted to ecstasy and weed, and subsequently attempting suicide. So it’s perhaps understandable that he’d want to make music that soothes rather than unsettles. 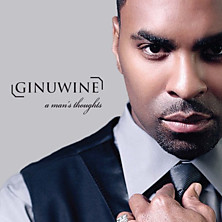