A surprisingly serious album from the American Idol alumni.

Five years and three albums down the line, it seems a little unfair to still be pre-announcing Kelly Clarkson with the words American Idol. The incredible success of the fist pumping "Since U Been Gone" propelled her into pop superstardom here in the UK and she's never looked back.


My December catches Kelly in independent mode. While her previous success may have had something to do with pop supreme songwriters Max Martin and Dr Luke's winning hooks, this time round each song on the album has been co-written by Kelly herself and other independent songwriters. Given the album opener “Never Again” bitterly starts with “I hope the ring you gave to her turns her finger green”, you’ve probably guessed that these lyrics aren’t going to be the happiest. My December is a journey from the immediate anger of a break-up to a time when it’s been accepted but still hurts.


Second single, the crescendoing “Sober” is three months down that journey. Beginning with a soft guitar reminiscent of U2’s “With or Without You”, it takes nearly four minutes to reach its climax layering Kelly’s desperate vocals over each other. The similarly desperate “Haunted” is a much easier song to get to grips with. As Kelly begs to not be left on her own, distorted strings, thrashing guitars mean and spooky vocals mean this could easily be found on any Evanescence album.


Despite the darkness, My December isn’t completely full of slow burning slowies. While bouncy, the 80s influenced “One Minute” sounds like it could have come off any Ashlee, Lindsay identikit rock-pop album, the best stomper is “Judas”. A woman betrayed, Kelly sings with passion over a pulsating guitars and a synthy verse.


Darker and more personal, there’s nothing very immediate about My December. Its closing track “Irvine” demonstrates this to greatest effect. Unlike anything we’ve heard from Kelly before, a gentle guitar backs a fragile, sombar vocal. This isn’t an easy album to listen to, but give it a chance - despite the intial backlash it’s suffered, this could be the album that really cements Kelly’s future as a serious artist. 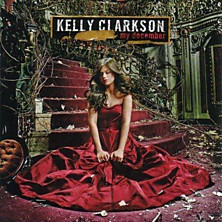