For more than 60 years, Chris Barber has been one of the giants of the British jazz scene. Without compromising his high musical standards or the precision of his trombone playing, he has displayed the ability to adapt to seismic changes in jazz music, earning admiration well beyond these shores. His band has embraced traditional jazz, blues, R&B, skiffle and gospel, and they’re all represented here on this glorious two-CD set.

The title-track tells us a lot about the spirit of this man and his music. It was written by American blues singer Brownie McGhee, whom Barber brought over from America to Europe at his own expense, so that his band could learn more about performing the blues from musicians steeped in the tradition. On his return, McGhee wrote this affectionate song listing the places where they’d played, and the people they met, while in the UK and Europe. As Barber recalls in the liner notes, some names posed a problem for the writers at Smithsonian-Folkways: "They tried to write down exactly what he’d sung… Ottilie (Paterson) was transformed into the blues singer R. B. Patterson!"

Many tracks here are very rare, compilers often eschewing Barber’s commercial recordings for more distinctive performances. Muddy Waters sings the Leiber/Stoller Kansas City taped at the Capital Jazz Festival of 1979; and Trummy Young, a legendary trombonist from the Earl Hines orchestra of 33-37, leads off Georgia on My Mind, recorded on a German tour in 1978. More home-grown are the band’s resident singer Ottilie Patterson performing St Louis Blues as if she were at a wake, the rough recording adding to the atmosphere, and Lonnie Donegan doing his thing with Diggin’ My Potatoes. Ottilie is mesmeric again on Lonesome Road, from a BBC Jazz Club session of 1962.

Other treasures include Joe Darensbourg on clarinet for the sweet ballad Rose Room, innovative guitar playing from Rory Gallagher on Can’t Be Satisfied, Jeff Healey’s paean to Satchmo in Goin’ Up the River, and the sprightly Ken Colyer composition Goin’ Home with Van Morrison on vocals. He’s one of a handful of relatively more contemporary artists, including Andy Fairweather-Low, Eric Clapton, Paul Jones and a supremely relaxed Mark Knopfler, who duet with Barber. Each displays fine versatility and easily conveys their enjoyment in performing with this legendary figure. 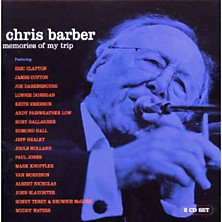