Tarwater Inside the Ships Review

Pop, but perhaps only in the minds of its German creators.

Berlin’s Tarwater duo started playing together in 1995, the same year that To Rococo Rot formed. Ronald Lippok was a member of both acts, and in Tarwater he was joined by Bernd Jestram. This is their 11th studio album, and at almost 36 minutes, it’s short but effectively compact. It also features 11 tracks, as if in celebration of their story so far.

Tarwater’s chosen iTunes genre is ‘pop’, and it seems that they’re correct in this bracketing. In a strange fashion. This disc is nowhere near as brooding as most of the duo’s work. It’s perkily strutting and electronically preening. It’s a centaur creature that’s part rock, part electro.

The opening Photographed dangles around a cyclic guitar motif, around which gyrate electronic decorations, erected in the classic post-Kraftwerk, post-Can style. The title cut features some kind of bagpipe or North African reed instrument, braying above layers of gleaming detail. There’s a subsonic drum presence, rather like a hugely amplified cardboard box-thump.

The Tarwater vocals are invariably deadpan, possessing a sharp way with Marc Bolan-style absurdist couplets. The curt beats of Radio War suggest thin metal distress, whilst flat vocal harmonies beguile, multiplying as they’re shadowed by bass colours. The songs are oddly smile-inducing, at the same time as being sinister. A multitude of details swirl, squiggle and crawl, always with precision.

Now and Again has a Syd Barrett whimsy, and Do the Oz is a John Lennon/Yoko Ono piece, as if covered by The Fall, ending up with a jostling pack of saxophones, and attendant Smurf voices. Glugged plumbing percussion underpins Furkan, and then there’s a number by Deutsch-Amerikanische Freundschaft (D.A.F.), a German duo who are Tarwater’s spiritual forefathers. Strutting and sparse, Sato Sato is a jolly romp, and almost a gypsy stomp.

Inside the Ships will assuredly grab hold by the second listen, if not the first... 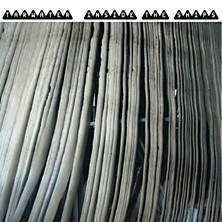