A debut set of white soul from the White City four-piece.

This west London four-piece formed only a year or so ago, but they’ve already supported The Vaccines, Kasabian and Mumford & Sons while describing their sound as "shabby Motown pop". And there are indeed occasions on this, their debut album, when they sound like a pub soul covers band allowed to let rip on a few originals. If you liked The Commitments, such moments should appeal. Elsewhere, the band offers a virtual tour of indie and mainstream rock styles that will either surprise or confuse – it will be interesting to see how their record company intends to market them.

Also debatable is the appeal of Liam O'Donnell’s voice, a curious instrument: imagine Sting’s more mannered kid brother, or Alex Turner on steroids. You will either love or loathe his passionate exhortations to "burn like the sun" and expressions of "beautiful delirium"; certainly, thickly spread as they are over everything, his vocals may prove to be the deal-breaker here.

But what for some listeners might be mishmashed fare, for others may be a delightful potpourri. She Is the One is a ballad that aims for the R&B (mid-60s variety) intensity of Try a Little Tenderness and Magnetic Field opens with a bossa nova rhythm. There are odd nods to new wave: Dry Your Tears recalls It’s Different for Girls by Joe Jackson in its opening guitar line before detouring towards mope-rock, while Cold as You is Police-style punk-pop. Chemicals is Coldplay in surging anthemic mode, albeit with an echoey Mark Ronson-ish production, while Beautiful Delirium is U2-ish bluster. Great Unknown is trip hop/baggy indie-dance and If It Wasn’t for You is a slow-burner with shades of Creep by Radiohead as sung by a west-Londoner with an adenoidal northern accent. "I’ve got nothing left to prove," sings O'Donnell, his over-determined vocals suggesting otherwise.

Various Cruelties, produced in Los Angeles by Tony Hoffer (Beck, Phoenix, Goldfrapp), has two undeniably great tracks. On Capsize, the band – its singer included – stops straining for a moment and keeps things light and lilting. Best of all is closing number Neon Truth, which despite the lyrical clichés about "setting the night on fire" and "reaching out for something", achieves the soulful transcendence the band have been striving for. Its strings-drenched coda is an exultant release worthy of the heroes they’ve been aping throughout – shabby doesn't come into it. At times like these, one feels rather warmly towards Various Cruelties’ overheated rock’n’soul. 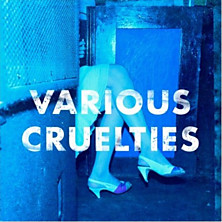