Roll the Dice In Dust Review

At its best In Dust sounds neither antique nor cutting edge, but timeless.

As displayed on their recent Live in Gothenburg EP, Roll the Dice can be a ferocious proposition in concert. Harnessing the often unpredictable power of analogue synthesisers, bolstered with organ and piano, their long, layered instrumentals tend to build to a peak of intensity before teetering and collapsing. On record, however, the Swedish duo of Peder Mannerfelt (producer and touring band member for Fever Ray) and Malcolm Pardon exercise more rigorous control. But their restraint doesn’t starve their music of drama: In Dust generates all the more tension by straining at its leash.

This is a very different journey to that described by Roll the Dice’s 2010 self-titled debut album. That album, more directly related to the work of trailblazing 1970s kosmische bands such as Tangerine Dream and Cluster, had a naïve quality to it that In Dust replaces with something more imposing. Album opener Iron Bridge rears up before the listener, monumental and forbidding, and establishes an atmosphere of gloomy beauty that persists for much of the album.

Dour as things sometimes get, Pardon and Mannerfelt always inflect their work with melody. At the album’s heart, Dark Thirty and The Skull Is Built Into the Tool both blend minimalist piano chord patterns with shimmering, rumbling and buzzing synth textures. Way Out slows anthemic trance into melancholy ambience. Only on the melodramatic Maelstrom does the music feel like it belongs more with Malcolm Pardon’s TV and film soundtrack work.

Far more representative is the striking sort of creativity evident in Calling All Workers, where a lonely tolling bell is joined by an oscillating analogue bassline and a rolling piano phrase. This develops into a gaseous melody in the Vangelis mode, anchored with deeply resounding key strikes, which opens a dizzying gulf at the heart of the track. It’s a remarkable blend of the acoustic and electronic, and clearly distinguishes Roll the Dice from producers who use retro gear merely to regurgitate retro sounds. There are numerous elements of 1970s and 80’s synth-based records here, but, as with artists such as Keith Fullerton Whitman and Daniel Lopatin (Oneohtrix Point Never), Roll the Dice are processing the work of their predecessors into something recognisably new. And at its best, In Dust sounds neither antique nor cutting edge, but timeless. 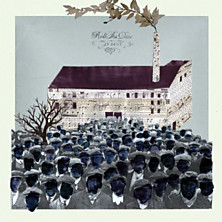