Seamless and polished, unhurried and wonderful, sparkling with a new-found black beauty.

Seventeen years. It’s an eternity. Countries have fallen and marriages have crumbled in less time, so it’s pretty remarkable that Blonde Redhead have not only survived this long but have continued to prosper, now releasing one of their finest works to date.

Penny Sparkle, their eighth official studio album, is a downbeat, glossed affair that largely dispenses with the busy guitar camouflage of past records in favour of glacially cool synth and Kazu Makino’s ice-maiden wail. They’re a band who’ve always possessed an understated beauty but where it might have seeped and soaked through previously, with the absence of the droning guitar dynamics heard on 2007’s 23, here it’s allowed to flourish.

The minimal plod of Will There Be Stars is an early indication of Penny Sparkle’s often bleak atmosphere – Kazu’s ethereal vocals are given a break – but perhaps more pertinently it also confirms a pointed move away from the powerful blankets of guitar that characterised earlier albums. The gentle heaving of My Plants Are Dead, as beautiful as it is, is wracked with whispering indecision – it feels ready and poised to explode into a track of the most grandiose splendour, but is ultimately allowed to ghost past.

While Blonde Redhead have always had the capability to be a band who lavishly build it up just to deconstruct, and we took delight in that once upon a time, Penny Sparkle’s restrained, almost tentative indulgence echoes a fresh sentiment that buys into the idea that the biggest statements don’t necessarily have to be the loudest.

Several albums in, the intent is very much on re-focusing and refining, and there’s a clandestine balance throughout this album. Synths buzz and murmur without over burdening Kazu’s vocal; the percussion is clean and crisp; and arrangements burn slowly instead of dazzling. It’s a rising sound that’s both bleak and terse. Always building and beautiful, their sparse, even minimal, approach lends Penny Sparkle a complexity that’s both rich and rewarding in both its inspiration and execution.

Seamless and polished, unhurried and regularly wonderful, Blonde Redhead are sparkling with a new-found black beauty. 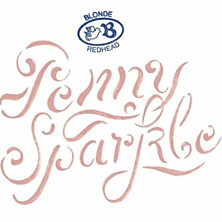