Mutually admired by fellow guitarists and critics alike, Johnny Marr hasn’t rushed his first solo album since The Smiths’ demise – a split from which some fans are still recovering, unlike Marr himself, who has barely looked back.

From successfully varied collaborations with Electronic, Modest Mouse and The Cribs, Marr has also (amongst others) provided valuable contributions to Pet Shop Boys, Pretenders and The The.

He also fronted 2003’s Healers album, effectively a solo effort and a set of fairly underwhelming plod-rock. Fans will be hoping that The Messenger marks a return to his rare musical open-mindedness, not to mention way with a tune.

The northern soul stomp and soaring slide of The Right Thing Right declares that he is no longer ignoring his past. It pounds like Doves, albeit with Marr’s unmistakable guitar jangle. His vocals initially recall Liam Gallagher before giving way to shouting.

It’s quickly evident that Marr’s vocal compares poorly to the eloquence of his guitar work. Yet not everything works in that department, either. I Want the Heartbeat layers on decorative chops to disguise a pedestrian tune, badly.

The lighter touch of European Me recalls Electronic, but this invigoration is short-lived. The title track adopts a typically catchy Manchester swagger, but Generate! Generate! sounds entirely forced.

With expectations high indeed, it’s perhaps unfair to underline The Messenger’s shortcomings – and it’s worth noting that if the next Beady Eye album was to sound like this, it’d be celebrated as a considerable progression.

But muddy production does these tracks few favours. More upbeat numbers prevail, new-wave energy crackling; but lyrically Marr misfires often. One wonders how The Messenger could have been improved with a foil for Marr on board – a producer other than himself, perhaps.

Bonhomie emerges eventually. The Crack Up will prompt smiles, and the melody of New Town Velocity shimmers. Marr’s guitar work can be fascinating – but it’s forever shadowed by less-appealing vocal work.

In a year where the music industry is declaring guitar music a far-from-spent force, it’s a shame that one of the instrument’s leading lights lacks the shine on his own solo album that he’s successfully brought to other bands’ records. 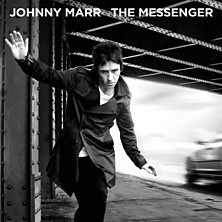