Attitude and ego comes with the musical territory.

After three years away Jamie Foxx is swaggering back into town with his very own party of A-list special guest stars, ditching the acting for long enough to make some music. Having famously declared his sophomore album Unpredictable an album for the bedroom, Intuition hears Jamie move to the dance floor for a collection of uncharismatic foot itchers.

TI is the first special guest star and appears on comedy album opener Just Like Me and from there the names keep rolling in with T-Pain, the Dream, Ne-yo, Fabolous, Marsha Ambrosius and Timbaland all getting on board. The trouble though is that the guests are far more interesting than the star himself, leaving Jamie often faltering when left on his own. Adding soul to I Don't Know and Timbaland's gritty productions on the grinding I Don't Need It helps solve that problem but without killer beats behind him all the way, Intuition sounds like an album lacking that essential bite.

Attitude and ego comes with the musical territory, but Jamie Foxx could out-boast even Kanye on the Lil Wayne featured and Beastie Boy penned Number 1 as he ups the sleaze factor asking a girl home so he can introduce her to Uncle Oscar and Aunt Emmy. If that doesn't win your worst lyric of all time award, then prepare yourself for the opening verse of Digital Girl. While itself, probably the best song on the album, Kanye rides the beats with a 20 second advert for the Apple asking for the song to be loaded on his ''Mac book Air, don't be old fashioned it's a new type of mac''. Product placement baby!

While technically pleasing in parts, Intuition is a sign that Jamie Foxx needs to figure out his own style before inviting others to join and ultimately overshadow him. 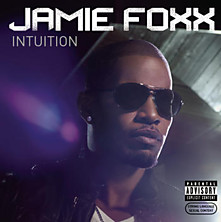