This 1996 debut still stands tall as the sound of abandon and messiness.

To some, it seemed a peculiar moment during the Olympic closing ceremony when Norman Cook popped out of a bus in a giant inflatable octopus, bringing his giddy rave action to proceedings. He belonged there, though. Fellow performers the Spice Girls and Liam Gallagher may’ve sold more in the 90s; but you’d be a fool to forget Norman’s role as the go-to party-starter from the latter half of the decade.

After a second coming with chart-toppers Beats International followed his stint in The Housemartins, Cook had an acid house epiphany. He got into making tunes under names like Pizzaman and Mighty Dub Katz, as well as co-founding Freak Power. But it was as Fatboy Slim that he captured the good-time zeitgeist and eventually became one of the late-90s’ formidable superstar DJs.

His debut, Better Living Through Chemistry, is more of a compilation than a proper album per se. Much of it had already been released, either as singles or via Skint’s Brassic Beats series.

Indeed, along with Skint, he helped spearhead an array of chiefly Brighton-based bangingness at the Big Beat Boutique club night (a sort of south coast response to London’s Heavenly Social). This paved the way for the likes of Midfield General, Lo-Fidelity Allstars, Bentley Rhythm Ace and X-Press 2 to follow.

The blueprint was already there: the beats were big, the house was mostly acid; the funkier end of crate-dug breaks prevailed, and there were cheeky lifts and samples ahoy. Santa Cruz borrows Lulu’s tremendous Love Loves to Love Love, Going Out of My Head batters I Can’t Explain, and Punk to Funk masterfully deploys Keith Mansfield’s Young Scene.

The key track, however, was Everybody Needs a 303: a champion acid monster of a tune, it encapsulates the Fatboy ethos in just under six minutes.

Sixteen years on, Better Living Through Chemistry stands tall as the sound of abandon and messiness, a joyous soundtrack to an era of caning it and the third (or fourth… or fifth?) Summer of Love. Though you’ll probably have to ask your parents what that thing on the cover is. 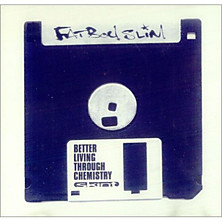