Sometimes Aled's control and high standard overwhelm the songs he chooses to sing.

Who'd be Aled Jones? You spend a lifetime making music, release 22 albums, find yourself a niche in the hearts of a nation and still the first thing anyone asks you about is an animated ice fella. Yet listening to Reason To Believe, his first album with a full band, it's easy to see why they do.

It's not that he's living in the shadow of The Snowman, but his training as a choirboy informs his adult voice to such a point that sometimes his control and high standard overwhelm the songs he chooses to sing.

It's a common problem amongst the singers who came from outside pop music - Michael Ball and Hayley Westenra are two other fine examples of it. How do you release your grip on your voice so it may sit comfortably in songs that were never written to be sung by a trained larynx?

One way is to get a guide and it's something that Aled does well here. The interest has all been about his duet with the unique timbre of Cerys Matthews on the ever popular "Some Kind Of Wonderful". While that duet does give a new and unusual edge to both of their voices, it's actually the album opener, Jimmy McCarthy's powerful "No Frontiers", which deserves the plaudits for best choice of collaboration, as the sweet and strong Gretchen Peters weaves her vocals around Jones' rich lead.

But this is an Aled Jones album and it is on the tracks where he sings alone that he should be judged. What you soon find when you do look at it that way is that the singer has no ability to change his tone to suit a song. Everything is sung in a somewhat formal and suitably expressive way, regardless of whether it is a beefy track like Yusuf Islam's "Father And Son" or a gentler one, such as Sarah McLachlan's "Angel".

For the most part, the songs are passable and enjoyment of them comes down to a straight decision on whether or not you like his voice. However, on his version of Leonard Cohen's "Hallelujah", things do go a little weird, as he slips the proper church choir pronunciation of the title in-between the verses, making it a very odd experience.

It's a forgivable mistake, especially when you consider just how often he's sung the word, both as a boy and in adulthood on programmes like Songs Of Praise, but it shows, in a succinct way, the references that will always dog Aled's music.

He may grow old, he may make album after album, he may make interesting choices in the tunes he covers, but the reality is that because of his early stardom and numerous classical releases, at his back will always be that choirboy, ready to steal away any real chance of reinvention. His ongoing success depends wholly on how comfortable he is with that. 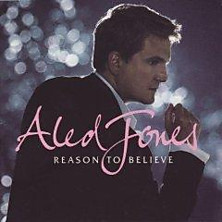