An unmemorable collection of clichéd rap numbers from the Gym Class Heroes vocalist.

In the years between Rage Against the Machine’s post-Battle of Los Angeles split and their triumphant, chart-topping revival, there was talk of a solo record from frontman Zack de la Rocha. Saul Williams said it was brilliant. DJ Shadow and Company Flow were involved. On paper, everything suggested the end product would be incredible. Then, nothing. Truth be told, the silence was probably for the best: expectations can crush many a release, and de la Rocha was never likely to escape the shadow of his since reunited bandmates.

Travie McCoy has no such worries. As the lead vocalist of rap-rock middleweights Gym Class Heroes, New Yorkers who peaked commercially with 2006’s As Cruel as Schoolchildren LP, he’s hardly a pop force. Indeed, one could read the title of this debut solo collection as acknowledgement of his slide from chart status – that was then, but this is now and the present is going to see him reborn, ready to conquer the mainstream all over again. And he well might. But it won’t be pretty.

Lead single Billionaire is certain to crack the top five come Sunday’s countdown, but its cod reggae vibe is horribly dated and McCoy’s lyrics both borish and boring. Exhibitionism disguised as aspiration is nothing new in rap, but the bizarre recession-beating braggadocio on display here leaves a distinctly sour aftertaste. A comparable effort, lyrically, is Justin Timberlake and Snoop Dogg’s excellent Signs. Where that 2005 hit sparkled with Neptunes savvy, McCoy and track partner Bruno Mars are comparably more likely to be watching Dulwich Hamlet lose at home on a soggy autumn afternoon than basking in the glow of another Venus or Serena victory in the “Wimbledon arena”.

While Mars fails to contribute the same magic that made B.o.B’s Nothin’ on You a smash, another collaborator fares better. Opener Dr. Feelgood is lifted to new heights by a typically soar-away Cee-Lo Green performance – the Gnarls Barkley/Goodie Mob emcee slips between up-tempo beats with a spotlight-stealing chorus. A fun breakdown as the track enters its final third is reminiscent of the old-school R&B values of Janelle Monáe’s The ArchAndroid LP – but further parallels with such classics are in short supply.

McCoy employs too many disparate styles – heavy rock on Superbad (11:34); a Hard Knock Life-echoing schoolyard skip on Akidagain; Guetta/will.i.am ‘good time’ sounds on After Midnight; Jason Derülo-trumping Auto-Tune vocals on The Manual – for Lazarus to hold any attention for more than a fleeting period. He also commits to commercial release a repulsive reinterpretation of Supergrass’ 1995 hit Alright – it should have been aborted at the earliest possible stage. Stepping out alone might have seemed a smart idea on paper, but these 10 tracks are every bit as memorable as those that de la Rocha left in the studio, and T-Pain sure isn’t El-P. 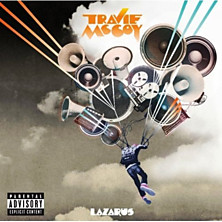