The Radio Dept. Clinging to a Scheme Review

Measured Swedish outfit come up with new material most definitely worth the wait.

It’s been a head-scratchingly long time since we last heard from The Radio Dept. – four get-a-bloody-move-on years to be exact And despite being together in one form or another since the mid-90s, the group has only put out three records, including this one. Doesn’t usually bode well, does it? But as a return, and a hugely anticipated one at that, Clinging to a Scheme quickly proves that we’re safe as ever in the Swedish outfit’s slow-to-create, yet intent-on-perfection hands.

Claiming to be influenced by “minimalist post-punk, krautrock, repetitive motorik beat (eh?) and ambient noise” for this release, we’re not surprised to find there’s a whole world of oddness going on in these 10 hazy swooshscapes, as speech samples intermittently burst in on layers and layers of intricate guitar lines, pianos, strings, horns, drum machines and flutes. When summed up like that the record sounds cluttered, but it’s far from it: The Radio Dept. have cleverly managed to conjure up music with a thoroughly minimal feel, despite this hive of activity instrumentation-wise.

And there are plenty of pop moments, too. Fans of Phoenix will be right at home with the breezy Heaven’s on Fire, and Never Follow Suit comes across like a slowed down 90s dance classic turned into a catchy reggae jam Lovers of lo-fi indie will be appeased by This Time Around and The Video Dept., the latter with a ping-pong beat. Perhaps most bizarre of all, though, is David – the track verges on sing-along hip hop, albeit Radio Dept. style

But it’s when this mysterious trio are at their most poignant that goose bumps prick the skin. Spectacular closer You Stopped Making Sense is Clinging to a Scheme’s ultimate tearjerker, all chiming guitars, glockenspiels and metallic-sounding distorted vocals leading a haunting melody and affecting lyrics “Don’t say goodbye...” begs singer Johan Duncanson towards the end of the track, and it’s as if a broken-hearted Cyberman is crooning his final lament. Someone give him a cuddle.

And as the curtain comes down on another superb Radio Dept. offering, months and years in the making, you’ve got to wonder: was it worth the wait? Oh, absolutely. 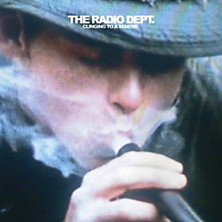