Born in California but based in Berlin, Dustin O’Halloran is an artist whose world-weary piano work – beguiling and beautiful, but laced with a certain, end-credits fatigue – has taken him from LA-based dream-poppers Devics to contributing tracks to Sofia Coppola’s bold but flawed 2006 film Marie Antoinette, and further still, to a pair of Piano Solo sets (released via Bella Union) and the soundtrack to An American Affair. He is an artist steadily making a name for himself, both in music industry circles and cinematic ones. Anyone who heard either of his Piano Solo collections will know that O’Halloran’s expression of myriad emotions in his keystrokes is excellent – and this rather fuller, strings-and-all offering is more embracing, still.

O’Halloran is here aided by the ACME ensemble of New York, a troupe whose string contributions have lent depth to recent recordings by Grizzly Bear and Owen Pallet. But while there’s more happening in the mix, like the pianist’s solo arrangements, everything feels streamlined – linear, maybe, but only when the end is worth skipping the diversions for. There’s always a destination at the forefront of O’Halloran’s compositions, and the joy comes from the journey itself, rather than the rest-stops or spot-the-whatever motorway games. Sometimes the conclusion is telegraphed at the outset: Opus 43 begins with light touches at the top end of the range, plays it straight through strings that weave like slow-motion display team jets, and rather ends where it began. Elsewhere, A is very different from B, but no less beautiful for a shift in texture – Fragile N. 4 is such a piece, which swells come its downward curve in a manner that mirrors the measured hardening of a lump in a throat.

If O’Halloran’s Piano Solo releases had a flaw, it’s that their hands were shown rather early, and that longevity – when stripped of an accompaniment, be it on a screen or outside a window – was questionable. They were collections of mood pieces, time and place dependent on the individual but certainly unsuited to more regular visits. Here, though, there’s greater warmth, a universally affecting resonance, that should ensure Lumiere is more frequently plucked from stillness on a shelf and allowed to wander its way into the heart. That, ultimately, is where these tracks wind their ways to; and, given the opportunity, it’s there that they will stay. 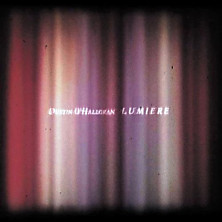