The producer has thrown down another musical challenge that’s well worth rising to.

Lorn celebrates his switch from LA’s Brainfeeder label to its kindred UK spirit, Ninja Tune, with his follow-up to 2010’s Nothing Else, a landmark album of twisted electronics and cracked melodies. That album, Lorn’s full debut, saw him gain the support of fellow sonic samurai Amon Tobin, who he recently supported on the stunning ISAM tour, and earned him a flurry of praise.

It’s clear on Ask the Dust that Lorn, the musical mask for Milwaukee’s Marcos Ortega, has retained his love for melodies. But they remain so strained and squeezed by the oppressive beats and dark ambience that surround them that each melody is forced to dig its fingernails into the aural grit and cling on. It’s this mixture of strength and fragility that Lorn has made his trademark and it’s heartening to hear that, while this is no rehash of past glories, he can still create music that is as strong as it is sensitive.

The Well displays this talent, as distorted choral blasts and corroded bass and beats are joined by gentle interludes of piano and a simple vocal snatch that provides a tangible emotional pull. The grinding bass of album standout Ghosst is more of a sensory assault but still retains a soft, yielding core.

Ortega graces various tracks with his own heavily treated vocals, a trick employed briefly on his previous album but used more liberally on this occasion. Weigh Me Down opens with a contorted vocal hook, which is joined by fidgeting beats and metallic yet somehow emotive chords. A further layer of discernible lyrics is disarming on first listen though.

The vocal elements of the growling Diamond and neon-lit ballad The Gun are what play the greatest role in setting Ask the Dust apart from Nothing Else. Overall, however, both albums share the same darkly menacing tones; this is another ride that’s far from easy but is just as rewarding at times.

Less gritty, less grimy, and more digital in its overall sound but no less inventive than its predecessor, Lorn has thrown down another musical challenge that’s well worth rising to. 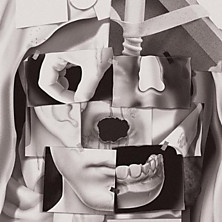