The flute-like voice of Ireland’s Heidi Talbot is a fine instrument. Every word is clear, each note hit, yet it’s no bragging perfection. Her tones still have a whispering undertow to them.

She has been around for a while: this is her fifth album as a solo artist, and she has also recorded and performed with the Irish-American collective, Cherish the Ladies. Talbot is a schooled singer, and also a capable ukulele player.

But the title Angels Without Wings seems curiously inappropriate for an album that doesn’t have much of the gritty or the earthbound in it.

At points there’s a distance to this album, a mannered approach, and the songs’ emotional hearts often feel bypassed. But on the song that she does riddle with feeling, Dearest Johnny, Talbot is majestic.

She retains a tinkling precision here, but the overall sound is freer, aptly reflecting the traditional origins of the song. Buoyed by banjo, fiddle and accordion, her voice transmits both anguish and pride, beautifully inhabiting her character.

The other problem with Angels Without Wings is guest overdose. Although the Mark Knopfler and Boo Hewerdine guitar support is a good fit – particularly Hewerdine’s sensitive work on My Sister The Moon, a track he also penned – the vocal spots are less consistent.

On Button Up, the Scottish cadence of King Creosote chimes well, but on Wine and Roses Tim O’Brien seems shoehorned in. This happens repeatedly: Talbot is getting on very well with a song and the introduction of a new voice halfway through breaks the mood.

It’s particularly inappropriate on the break-up track I’m Not Sorry – a solo lyrical theme if ever there was one – when Guy Fletcher pipes up.

Angels Without Wings is as downy as Talbot’s voice. That’s not a compliment – nor, in fact, is it an insult. For while some of this album is beautiful and delicate, at other times its vocal and musical honey smothers the intimacy of the lyrics.

Talbot could have buried a few more stingers in the nectar. 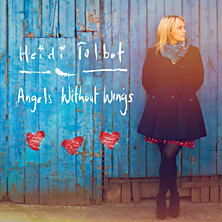