A carefully crafted collection from the Israeli singer.

Much of this recording has an aura of intimate communication, yet its sound is considerably expanded, with contributions from The Strings Orchestra Istanbul. Producer Ben Mandelson harnesses these forces, fine-tuning them, and directs a further roster of guests.

Throughout, Levy refines her fusions. Flamenco is her foundation style, but across it she smears elements from Argentine tango and Portuguese fado. Three songs are delivered in Levy’s Ladino tongue, the rest in pure Spanish, but two are translations of songs from Turkey.

This might suggest that Libertad is something of a patchwork, but Levy and Mandelson have effectively squinted their eyes so that a single, cosmopolitan style prevails. It’s a canny move, as followers of flamenco, tango and fado tend to be gathered into a single camp, at least within the UK.

The bulk of Libertad was recorded in Tel Aviv, with strings laid down in Istanbul. Levy’s father was Turkish, so this is a further exploration of her tangled roots. The core trio features acoustic guitar, upright bass and globally-aware percussion, but there are additional showcases for accordion, clarinet, trombone, flute, and more besides.

Levy’s delivery is characterised by a dramatic, emoting flair, but understated balance is provided by the measured moves of the band. The title track matches earthy cajón percussion with sleek strings. Flamenco is usually found fusing with Moroccan music, highlighting its own Andalusian roots, so it’s unusual to hear the disc’s Turkish or Persian flamenco mash-ups. But it all coheres in seamless fashion.

Shoef K’mo Eved also has a different feel, slinking with sparing bass and guitar picking, with strings crowning the song once again. The orchestra makes an even bigger impact during La Rosa Enflorece, imposing a strong Turkish feel, and almost heading all the way down to Cairo. 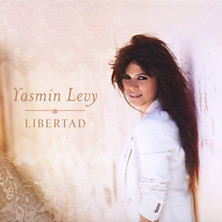