Gothic scream-queen digs up the dark side of the 80s.

For her latest set – actually her US EP Striulum with three bonus tracks tagged on for the European market – classically-trained gothic chanteuse Nika Roza Danilova, aka Zola Jesus, has thrown back the veils of feral scuzz and grime that swamped many of her earlier recordings, a corollary of her love for early industrial music and power electronics. Tracks like album opener and single, Night, benefit from this paradigmatic shift, resounding with an anthemic clarity and accessibility unrecognisable from her prior contributions to a split with fellow Wisconsin operative, “horror electronics” cancer Burial Hex.

Over dark wave synth sweeps that owe everything to the 80s and a martial bass drum throb that’d make These New Puritans proud, Danilova intones in a spooked-up siren call equal parts Siouxsie Sioux (an undoubted influence) and Cocteau Twins' Liz Fraser. It’s as if Florence Welch was hooked up to a totally different Machine, turbo-charged by Cold Cave’s hipster gloom, spewing faux miserablism for kids not yet saturated on a diet of vampire celluloid and zombie pulp.

There’s no denying the potency and inherent potential in Danilova’s voice, whether she’s deadpanning malevolent moods, wallowing up a banshee-wail of tender loneliness or breathing spectral whispers over minimalist passages of pensive melodrama. But, without the wizard’s curtain of feverish fuzz to hide behind, her compositions can appear vulnerable, hollow and frail. Too often the same cheap sonic and lyrical slogans are rolled out; tweaked and served up as fresh offerings.

Stridulum II also demonstrates the perils of revisiting the past, especially if, as is undoubtedly the case with Danilova, you were too young to live through it first time round. To gaze back through narrowly-focused and rose-tinted specs is to ignore the untold aesthetic horrors, with all their connotations, of the 80s, a decade distinguished by its harbouring of gratuitous self-interest and an ugly wardrobe. Some of the pieces here, such as the penultimate Sea Talk, could’ve been lifted from some turgid Top Gun-type blockbuster, and those are memories better left buried. 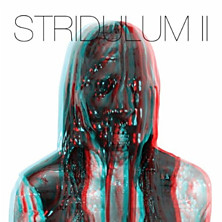