I can’t think of anything that would improve this package...

What a wonderful way this is to celebrate a significant new partnership: Richard Egarr’s first recording as the newly appointed music director of the Academy of Ancient Music…and as Egarr points out in the notes, it’s just possible that these Handel scores might have been played by the original Academy of Ancient Music, which when the Op. 3 Concerti Grossi were published in 1734, used to meet at The Crown and Anchor in the Strand in London. Of course, quite how they might have played them we don’t know, but if it was with anything like this degree of colour, variety and imagination, then their audiences were lucky indeed. The pungent wind sonorities in the first Concerto Grosso with its warbling recorders and stentorian bassoons, make a delicious contrast to the rich strings and duetting oboes of the second. In the third concerto, Egarr adopts Handel’s alternative for solo flute rather than oboe, and Rachel Brown’s elegant playing justifies the decision.

The broader French baroque style of the fourth Concerto Grosso is very satisfying, with Egarr’s harpsichord playing adding not just the expected stylish flourishes and ornaments, but also a real sense of drive and momentum. The fifth concerto’s more operatic sense of drama is given full reign, with some deliciously dark colours, and the players relishing every harmonic twist and turn in the central slow movement. When it comes to the last concerto of the set, with a mere two movements, Egarr scratches his head for a moment, then seats himself at the organ to improvise a solo in the middle, and provide an explicit link with Handel’s next publication: the Organ Concertos Op. 4. Then comes a final flourish: an earlier Handel Sonata, which is really a chamber violin concerto, full of Italianate touches, and led with panache by Pavlo Beznosiuk.

I can’t think of anything that would improve this package: performances are stylish and beautifully polished. The recording is a beauty, in stereo or in surround if you buy the hybrid SACD option, and Egarr’s notes are exemplary. Even the cover illustration of London’s Regent Street at night feels spot on; it’s only when you look in the booklet that you find out that it was actually painted in 1898…! 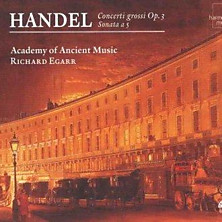